Letter #81 comes from Michaela in Slovenia.She says her friends call her Misa (sounds like Misha).She says she shares a birthday with the first Czech president,Vaclav Havel and two great Canadian hockey players,Mario Lemieux and Patrick Roy.She lives in a spa town called Karlovy Vary,which lays on the western side of the Czech Republic and has +/- 55,000 inhabitants.She also says that every July in her hometown is the International Film Festival.She loves the festival and says last year she watched 13 films in 9 days,although her record is 15 films in 2008. :)

Michaela now lives in Ljubljana because she is attending the University of Ljubljana where she will spend one semester.She is a student of Slovonic studies of European Union and History at the University of Parduice,which is located on the eastern part of the Czech Republic.She is in her second year of school.She says she would like to be a historian in the future.She is also interested in balneology,which is all about spas,spa treatments,etc.I would guess it has a lot to do with where she lives. :)

She loves ice hockey and her favorite teams are the Toronto Maple Leafs and Energie Karlovy Vary.It seems we have a Canadian theme going today. :) She also loves listening to music,reading books,travelling,swapping, and writing letters.

She can speak a few different languages,such as Czech,English and a little French.She would also like to speak German since she is interested in 19th century German history. 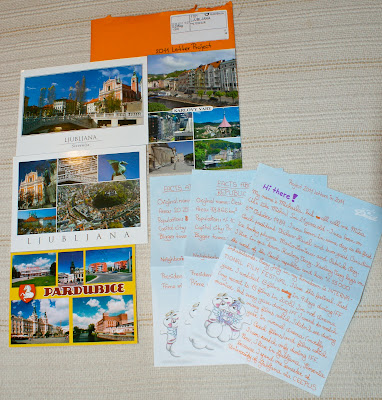 Email ThisBlogThis!Share to TwitterShare to FacebookShare to Pinterest
Labels: slovenia