Letter #52 comes from Ashley who sent us a really fun letter.He wanted us to do the work to figure out where he's from,so I will let you figure it out,too.If you think you know the where he's located you can put your answer in the comments so we can see who gets it correct.

Here is what he tells us about his city.His first clue was that his city is called the "Festival City" due to all the festivals they host during the summer.His city lies at 52° 32' 43"N, 113° 29' 24" W.He is in the mountain standard time zone (the same as Denver,CO) and is 2,300 miles NW of Roanoke,VA.There is about 800,000 people living in the city proper and nearly 1.2 million people in the greater metopolitan area.

In 2004,they celebrated 100 years as a city.They were a major trading post for the Hudson Bay Company since as early as 1795.He did give away the country name in the next sentence,but I won't give you that,it will be to easy for you to figure it out. ;) There is a city that runs through his city and the parkland connected to it is twenty-two times the size of Central Park in NY.He says they have the most dedicated "green space" of any other city in the country.

Ashley also tells us that their economy is based on the oil and gas industry, but has a large diversity in their economy,including technology,bio tech and finance industries.He also told us that despite what Hollywood says,they do not live in igloos or drive dog sleds. ;)

Ashley works as a Child and Family Services case manager and moved to that area so he could finish his Psychology degree.His wife works at a not-for-profit company that is focused on providing recreational opportunities for people in a very busy city.They are also new parents to a set of 2 year old twins.Congratulations...now you and your wife get double the love. :)

He also says that we can go to google maps  (after you figure out the city) and follow 98th Avenue across the James MacDonald bridge for a nice view of the river valley and a very popular approach to their downtown area.

Thanks Ashley for a wonderful letter.It was definitely something we didn't expect.I never would have thought we'd get a letter filled with clues to find out where the writer lives....that was a great idea and so fun!Thanks so much for taking the time from your busy life to send us this fun letter! 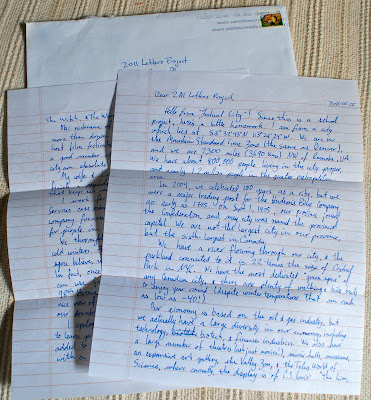