Letter #69 comes from Corinne in Switzerland.She lives in Geneva with her two children and husband.She says they have four national languages,German,French,Italian and Romansh (the fourth is only spoken a a few remote valleys).She says that despite the differences,the people there get along quite well and live very happily together.

She says that Geneva is well known for the muticultural atmosphere thanks to the United Nations offices located there and the multinational companies based there..She used to work for an American company,but decided to quit and actually enjoy her life.

As many people may already know,Switzerland is known for their watches,chocolate (I love swiss chocolate), and cheese.Cheese is one of her favorite things.On the front of the card she wrote in is a picture of a famous trademark of Geneva,Jet d'Eau,a water fountain.Behind it is the White Mountain which is in France.She also says that if you love skiing,then it's the place to go.Thanks for the letter.We were lucky to get it because it was accidentally sent to our neighbors house and they opened it and realized it was ours so they returned it to us.Enjoy her card below: 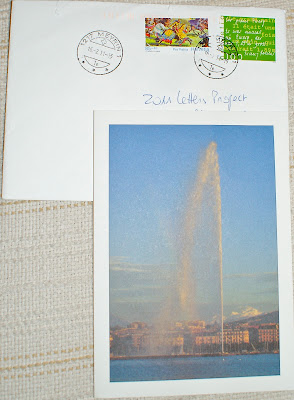 Email ThisBlogThis!Share to TwitterShare to FacebookShare to Pinterest
Labels: switzerland