Letter #79 comes from Beverly in California.She says she is retired and loves writing letters.She lives in Davis,which is a university town about 20 miles from the state capital,Sacramento.Her town is known as the city of bicycles because the town is flat and since there are wide bike lanes,everybody likes to ride bikes.Her town has about 60,000 inhabitants,but she says it feels like a small town.She also says that the university has one of the best veterinary medical schools in the country.They were even able to uncross the eyes of Clarance the cross-eyed lion there.

She has enclosed a postcard of one of her favorite national parks,Sequoia Kings Canyon,where you can find the oldest and biggest trees in the world.She told us that the tallest trees are the California Coast Redwood trees.She also told us something really cool that we have seen on tv,the sequoia trees are so big that if you cut a hole in the middle of the tree,you can drive a car through it!I just find that so amazing as did my girls.Can you even imagine seeing a tree that big!She says that cutting a hole in it doesn't kill the tree because the growth of the tree comes from the outside.Another interesting fact we didn't know. :)

Beverly currently works as a theatre critic.She says that many people think it's a great job because she gets to see all the shows for free,but she says the hard part of the job is that she has to sell all the shows,whether she wants to or not.When she gets home from the movies,she has to write the reviews so people can decide to watch it or not.I think it sounds like a great job (at least when the shows are good) and a helpful job because in our economy,I don't think anybody wants to spend their hard earned money on a terrible show,so reading the reviews could help people make a better decision about whether to watch a certain show or spend their money elsewhere.

Beverly has three grown children and one grandchild.Her and her husband also have three dogs that came from the SPCA.She fosters dogs for the SPCA and has watched more than 150 dogs go off to their forever homes.She loves the little orphaned puppies that she has to bottlefeed.Aww,that sounds so cute. 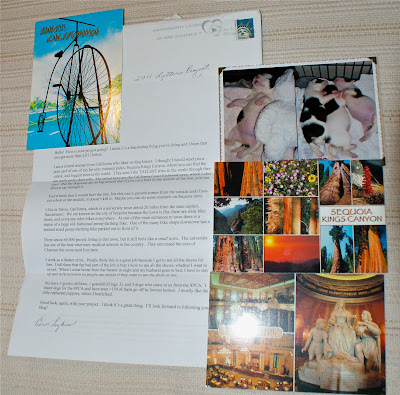