Letter #66 comes from Manuela in Italy.Manuela is a student and studies languages and tourism sciences.Her major is English,so she is practicing writing in English.She lives in the northwest part of Italy,which is near France's border line.She says she can get to the south of France in less than 2 hours.The city where her university is located is called Torino,which is also where the Fiat Group was born.She said that on March 17th,the country was celebrating their 150th year of Italian Unification and have lots of celebrations.I'm hoping she had a great time since it has already passed.She also says that Torino was the first Italian capital in 1861 because the Savoy King lived there.

She says that Tourino is one of the greatest cities she's ever seen and has shared with us some history of the city.Turin(also known as Torino,of course) was annexed by France in September 1802.Turin was the prefecture of the French department of Po from 1802 till the fall of Napoleon in 1814,when the Kingdom of Piedmont-Sadinia was restored with Turin as its capital.In 1871,the Frejus Tunnel was opened,making Turin an important commnication node between Italy and France.The city in that period had 250,000 inhabitants.She says that some of the most iconic landmarks of the city,such as the Egyptian Museum,The Mole Antonelliana,the Grand Madre di Dio Church and the Piazza Vittorio Veneto were built in that period.In 1865 the capital was moved to Florence and since July 8,1871 the capital has been Rome.

She also says that in 1899 Fiat was founded and Lancia in 1906.The Universal Exposition held in Turin in 1902 is often considered the pinnacle of Art Nouveau design and the city hosted the Exposition again in 1911.By that time,the city had 430,000 inhabitants.The symbol of Turin is the Mole Antonelliana,which is named after the architect who built it,Alessandro Antonelli.Construction began in 1863 as a Jewish synagogue.It now houses the National Museum of Cinema and it is believed to be the tallest museum in the world at 548 feet high.

Turin is also home to the Shroud of Turin,which is a linen cloth bearing the image of what is believed to have the image of a man who appears to have suffered physical trauma,such as a crucifixion.It is kept in the royal chapel of of the Cathedral of Saint Johnthe Baptist in the city center.Many people believe it to be a depiction of Jesus Christ,but there is great debate supporting it and not supporting that it is him.It's a symbol of religious devotion and is one of the city's main symbols and tourist attractions.

Thanks so much Manuela for your fascinating letter about your city.We also enjoyed all the stamps on the letter...very cute. :) Thanks so much for writing.Also,she was very creative with the envelope and made it from a map of her city.Enjoy her letter and postcard of her city at night below: 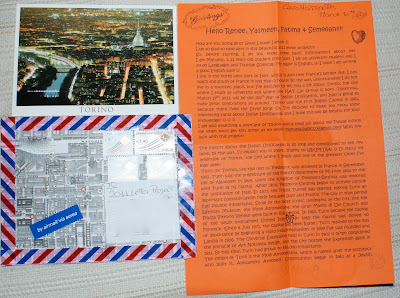 Email ThisBlogThis!Share to TwitterShare to FacebookShare to Pinterest
Labels: italy