Letter #41 comes from Ria,who lives on the Minot Air Force base in North Dakota.She said she tried collecting 2,010 letters last year,but didn't succeed,so she is trying again this year to collect 2,011 letters.I hope she can reach her goal.Maybe she can let me know if  can post her email address so that you can maybe write to her to cheer up her boring mailbox.She is actually trying to do the project every year,hoping that one day it will be successful. :)

She says that she is a proud wife to an airforce husband.She just moved to North Dakota in Nov 2010 after living 4 years in New Mexico.I guess in some ways,being married to someone that serves could be exciting since they get to move a lot and see different places that you might not have seen otherwise.Unless you move to a very boring place,but then at least you know you wouldn't live there forever.They hope to settle down in Maine once he retires.They have 3 children,2 daughters and a son.

She says the population of Minot is 36,567 and that it's the fourth largest city in North Dakota.The city was founded in 1886 during the construction of the Great Northern Railway.Minot is also known as the "Magic City", commemorating its remarkable growth in size over a short time.

Ria says she is originally from England and first came to the US in 2006.She says North Dakota is a great place to live if you love outdoor activities,if you enjoy things like camping,hiking,fishing and other water sports.

Below is Ria's lovely letter,along with 2 beautiful postcards and some printouts of her state.Thanks Ria for the letter,postcards and info! 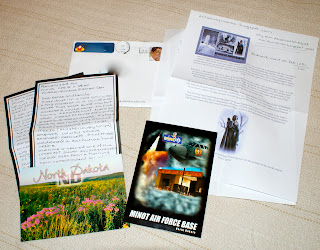