Letter #59 comes from Beth,who lives about 3 hours away from us in Richmond,Virginia.She has been living there since 2002 when she moved there to attend the University of Richmond.She now works in the academic department of the college.She loves her job and her colleagues very much.

She grew up in the south side of Virginia and still visits the area all the time so her dog can run around all over her parents yard.

Beth loves to travel and has been to 39 states and 6 countries.She also loves music and frquently travels to see her favorite bands play live.She also says that she has seen her favorite band,called The Academy Is about 70 times over the past six years...talk about a major fan! :) She's followed them from Richmond,Virginia to New York to Chicago and even to London.Do they know that you have followed them so much?They should give you free tickets by now. ;)

Her more recent obsession is British tv shows such as Dr. Who and Torchwood,Misfits, and Being Human.She says once you see one show,you get sucked in and become addicted to them.She says the shows even help her to be able to understand her friends from England more.

Thanks Beth for your lovely letter and she has also enclosed a picture of her beloved dog,Sassy.Enjoy her letter and picture below: 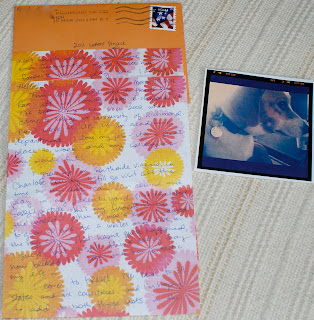 Email ThisBlogThis!Share to TwitterShare to FacebookShare to Pinterest
Labels: virginia