Letter #51 comes from Emile, who lives in a little village in England called Stoke d'Abernon.It is located in  the county of Surrey,which is just on the southwestern border of London and is a very pretty area.It is a very old village.One of the oldest houses there has a painted sign on it showing the year in which it was built- 1415,about 80 years before Columbus set sail from Spain.St. Mary's church is also located there and is even older and goes back to about the year 1300.

Emile says she is very interested in local history and while looking around St. Mary's church with a friend,she found some pieces of Roman brick on the lowest parts of the wall.She says that the builders of the church would have used whatever material they could find in the area and that it could mean that there was a Roman village in the area,especially since Julius Caesar crossed the Thames River,which was only 10 miles from the church.

Emile's parents are from Goa,which used to be a Portuguese colony in India and she grew up in Kenya until the age of 13.She says that like many people in the past and present, they have moved to a new home,which for them is England.She says she thinks that is one way the world has become a better place and is more tolerant is because people now live next door to people that may have come from thousands of miles away.I agree that it does make the world a better place when you get to learn new ideas,try new foods (that's the best part) and learn to see things differently and sometimes appreciate what you do have when some people had nothing before coming here.She tells me about her friend that is about as English as you can imagine found the diary of his Italian great-grandfather and it mentioned how he walked (yes,walked) from Essex to Padua,Italy in the 1880's to sort out his father's will.I can only imagine the strength and will people had back then,yet we complain about having to walk just small distances in the parking lot of a store. ;) It's amazing how we as people have changed,sometimes I think we have more health problems now because of all the technology that keeps us from going out searching for things and doing more things.We can literally stay in our homes and have everything we need delivered or found online and not even have to deal with society.I wonder what the people of the 1800's would think if they could see us now.Would they like the luxury or would they miss doing things with their own hands such as building their own home,growing their own food,relying on neighbors to help you out,etc.On the other hand,with the invention of the internet,we are able to learn about so many things from so many different people without having to worry about travelling.

Thanks Emile for your lovely letter.Here's her letter below: 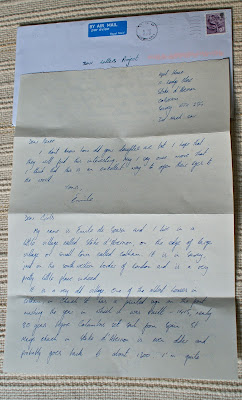