Letter #49 comes from Rebecca who is currently living and studying in China.Rebecca is orginally from Kansas, but her mother is from China.She will be finishing school in June and then will move to New York City.She is going to teach Chinese to high school students.I think that is wonderful.The schools in our area don't offer Chinese classes like they did in Michigan,which my daughters had signed up for before we moved here,so we missed out on learning Chinese.I think it should be offered in more schools since we are connected to China in so many ways,it would be wise to learn to communicate with them in their language.

She lives in Tianjin,which is one of the biggest and most important cities in China.There are about 7 million people living there,enough to make the government decide to make the city into its own state!There's even a new high speed train that goes from Tianjin to Beijin in 25 minutes.The train goes 320 kilometers per hour and leaves every 15 minutes.

She's been in China for almost two years now and lives with two roommates,one is Chinese and one is Korean.Even though all 3 of them come from such different backgrounds,they are able to clearly communicate with each other in Chinese.Her Chinese roommate is quite fascinating because when he was eight years old,he was selected to go to a special school that taught traditional Chinese dance and acrobats.He graduated at age 14,then travelled all over the world performing his dances and acorbats until he retired at the old age of 25. ;)

They had finished celebrating the Chinese New Year when she wrote the letter and says that they get a 2 month break so everybody can reunite with their family and spend time with loved ones.As everybody knows by now,it is the year of the rabbit and rabbits are extremely lucky.Something unlucky in China is the number four because it sounds the same as the word for death,so they avoid anything dealing with the number four.It is advised not to give gifts or anything in groups of four when in China.They also don't have a fourth floor on buildings (I guess they remain vacant?).But,she says that the government just passed a law saying that all buildings must have a fourth floor and that all streets must include buildings with the number four in the address.

She visited her mom in Hong Kong for the holidays then came back to China to celebrate with her friends.They ate dumplings and set off fireworks to scare off the demons for the next year,unfortunately the loud sound broke her window. :(

She thinks the most interesting thing about China is the Chinese language.There are over 100 different spoken languages and almost all are written the same way.That is really amazing!She also says that all names are two or three characters.The first character is your family/last name and the second and third are usually characteristics that your parents want you to have.

Below,you can see Rebecca's lovely letter written on pretty stationary and a postcard of the Great Wall of China and 5 lovely New Year cards.We loved it all Rebecca,thanks so much for writing! 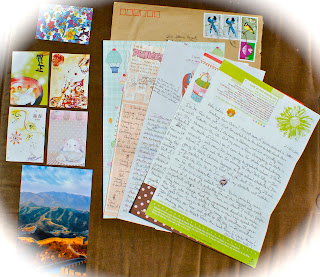 Email ThisBlogThis!Share to TwitterShare to FacebookShare to Pinterest
Labels: china