Letter #76 comes from Jihan in Malaysia.She is married with 3 sons (2 of them are twins).She works as a teacher at a primary school for pupils ages 7-12.She's been teaching for about 10 years now.She is now applying to the university to further her studies.

Jihan lives in a small town with her parents.She says Kata Bharu is the capital city for Kelantan,where she lives.She also tells us that Malaysia has 14 states and Kelantan is located on the eastern side.Kuala Lumpur is the capital of her country.Their surrounding neighbors are Indonesia,Singapore,Thailand,Filipina and Brunei.Islam is the main religion in her country,but they do have other religions there,too.She says their state flower is the hibiscus and their Independence Day is August 31,1957 and they have celebrations every year in honor of their independence.

In addition to her letter,she enclosed a key chain with a picture of a shadow puppet,it's called "wayang kulit" and can be seen at the museums or "Balai Seni" and also Malaysian currency,which I believe would be 1 ringgit?Thanks Jihan for your letter and goodies!Enjoy her letter and goodies below: 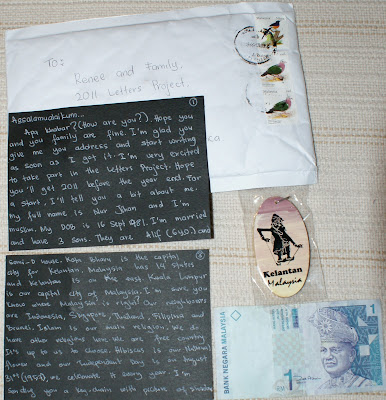 Email ThisBlogThis!Share to TwitterShare to FacebookShare to Pinterest
Labels: malaysia