Letter #47 from the United Kingdom

Letter #47 comes from Rebecca in the UK.She is married to the love of her life and says that even though she's 27,she feels like she's 19. :) I know the feeling (although I don't know if I feel that young),I think the key is to not let your number age dictate how you feel.Don't sit around and complain that life is passing you by,get up and do something to keep you feeling young. :)

Her and her husband have a white rescue cat called Ivy.I'm sure like many pet owners,they consider her their baby.Ivy also has a sister named Holly and can you take a guess when they were born based on their names?Yes,that's right,they were born at Christmas time. :)

Her husband is a web programmer and plays guitar in a band and she is a bookkeeper/accountant at two jobs.Although she enjoys her job,she would really like to be a published author.She is actually studying Creative Writing currently and would also like to teach creative writing,which she says she will probably need a Masters degree to achieve that goal.

Rebecca also enjoys art journaling....that happens to be one of our favorite hobbies.She also loves mail and mail art and has penpals all over the world.She's lucky enough to have her mail delivered right onto her door mat,so she can always hear the sound of the mail dropping.We know the feeling because we know the sound of the mail truck when he's down the road and we all gather by the window,watching him put the mail into the mailbox....it's the highlight of our day to get a letter.

She says that she lives in Yorkshire,which is the biggest county in England and wouldn't live anywhere else,that's how great it is.She also says that there is a north/south divide in Britain,with the North,Scotland and Wales being mostly considered poor and working class.She lives in the North so houses are much cheaper there and work is very scarce..She says that their accents are so rough that we Americans probably wouldn't understand them.I'm usually pretty good at understanding most accents,unless it really is a deep one.

Yorkshire has two of the UK's major cities-Leeds and Sheffield and are only 40 miles apart.Sheffield was a steel manufacturing area until the 1980's and is now very poor,much like the demise of Detroit (we know about Detroit,we lived about 15-20 minutes away for 10 years-the city has some beautiful architecture and really could use a cleaning because it has the potential to be such a great city if the government put time and money into it).The city of Leeds is more prosperous.She attended the university in York,which is in North Yorkshire and says it is a beautiful countryside peppered with cute little villages.

Rebecca has been to most parts of the UK since she used to go camping a lot when she was a child and still agrees that Yorkshire is the best place to live.In the picture below is a postcard of a boat at Runswick Bay and a prayer card featuring a tea bowl.Thanks Rebecca for sharing information about your town with us and for the postcard and card.Thanks again for writing.Here is her lovely letter and cards below: 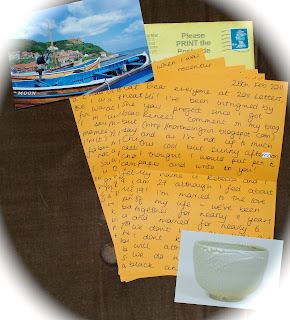