Letter #71 comes from Julie in Massachusetts.She says that her town,Westford,became a town on September 23,1729.She says that around 22,000 people live in her city.Her city is home to a granite quary and apple orchards.She even says that Paul Revere's son went to school in her city and there is a bell cast by Paul Revere in the local high school.

Boston built the first subway system in the US in 1897.On the green line you can see some of the antique trolley cars from the early days.She used to take the same subway when she lived in Cambridge to go to Harvard Medical School and still takes it to visit the city to see plays or visit the museums.She also told us some other interesting facts about here state,such as:
•There is a home in Rockport built entirely out of newspaper
•The fig newton is named after the town of Newton,MA
•The Basketball Hall of Fame is in her state
•Boston Common was the first public park in America
•Revere Beach was the first public beach in the U.S.
•Elias House of Boston invented the sweing machine
•Massachusetts mean "a big hill place"

Julie also sent us some amazing pictures.One of them was taken using a transmission electron microscope and is a picture of a very small alga,which is too small to see with your eyes,called Phaeopolykrikos.Another picture shows a picture she took using a compound microscope and in the picture you can see the coils that are stringing cells from a sea anemone.She says they are like tiny harpoons that catch tiny shrimp called brine shrimp.The solid white blobs are cell nuclei.The last pictures she took show her house this past winter.They didn't set any records,but it was very snowy with less melting between storms than normal.She says it's the most snow they have seen since moving to their house in 1999.Doesn't it look beautiful?(We are supposed to be getting 1-3 inches of snow Sunday)It's always nice to look at,but not fun to drive in. :) Thanks Julie for your amazing letter that included science....we love it!My oldest two daughters are really interested in what you do and will try to write to you once they get the chance.Julie has also enclosed some postcards,too,which you can see below with her letter.Thanks Julie for writing!Below are all the goodies she sent us: 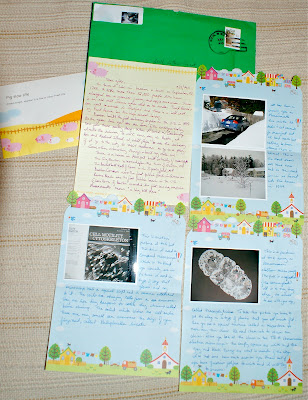 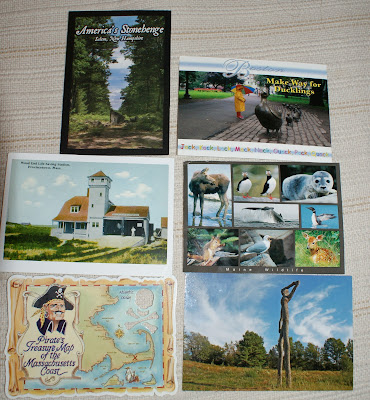