This letter comes from Misha in Tucson,Arizona.Misha is also homeschooled,she is currently a sophomore but will graduate next May,a year earlier.She lives in the beautiful Sonoran Desert surrounded by four mountain ranges.Most people can figure out their location by using the mountains as their guide.

In the summer she says it can get quite hot,up to 100 degrees,usually in May and June.In July they get rainstorms that they call monsoons almost every afternoon.I didn't even realize we got "monsoons", or at least that we called them monsoons in the states,so that is quite interesting to know.It can be pretty scary with thunder and lightning and since it pours down so hard for 1-2 hours,they can often get flash floods.

Misha says that in her city there are trenches called "washes" found all over that help to direct the water.She says they can be quite dangerous,so people are not allowed to play in them.

Something unique to the Sonran Desert,she writes,is the Saguaro Cactus,which can not be found anywhere else in the world.They take a long time to grow.It takes an arm of one cactus 50 years to grow and most cacti have several arms,so I guess it could take centuries for it to be fully grown.She also told us something quite sad,a few years ago they had a really bad freeze and all the saguaros froze and when they thawed out,all their "arms" drooped down because all their muscle tissue was weakened by the freeze and so it couldn't hold up its arms anymore.That is very interesting,I never would have thought that could happen.I've never seen a cactus on tv with droopy arms so I assumed that wouldn't happen.She says it's a crime to vandalize the cactus so they are protected and that their flowers are the Arizona state flower.In springtime,she tells about how the desert explodes with life.She used to live in California,so I think she felt she would miss out on nature moving to the desert,but she has been quite pleased with the natural beauty in her area.

One of the postcards she sent us is of the University Medical Center,which is she likes because she wants to work in the medical science field,either in genetics or chemistry when she is older.That is definitely a great profession to work in...I hope you are very successful with all your goals Misha!

She also enclosed a ticket from the Gaslight Theatre,which is local to her area.She says it's a small,old fashioned theatre where you are seated around a table and served complimentary popcorn and have interactive shows.It seems quite fun because she says people boo the villains and cheer the heroes!That sounds like a great theatre since you can really be involved in the show.

Next is a picture she enclosed of a lightning strike taken two summers ago during a monsoon.

She also mentioned a great place to go if anybody ever visits Tucson,it's called Eegee's and they sell the most amazing slushie type drink.She says it's not as sweet as a slushie and it has chunks of fruit in it.There are three regular flavors-strawberry,lemon and pina colada and also a flavor of the month that changes with each month.Seems like a great place to visit since she lives in the desert! :)

Well,Misha,thanks so much for the lovely letter,postcards,ticket,photo and a dried flower...nobody has sent in any flowers,you are the first Misha. :)

Please enjoy her letter below: 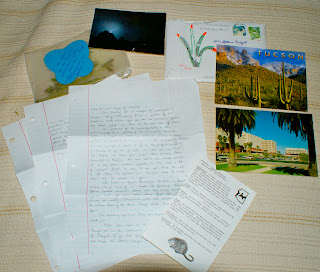