Letter #53 from The Netherlands

Letter #53 comes from Saskia, who lives in the Netherlands.She says she wishes they had this type of project when she was in school. :)

Like many people who have written us,she felt her English wasn't good,but as with every letter,the english is great,I think many people are too tough on themselves and are so worried about making mistakes.Anyways,back to the letter.She says she lives in the city of Amersfoort,which is located in themiddle of the Netherlands,not very far from the capital Amsterdam.The Netherlands is located in the west of Europe and shares borders with Belgium and Germany.She just recently moved to Amersfoort in January,so she is learning about the area along with us. :)

She has finished her studies in July for her Bachelor of Applied Sciences and now works in a hospital.She has described her job,so if you are eating,you may want to read this later. :) She works in a laboratory where they receive potentially infected human materials,such as urine and stool samples and then try to find out what is causing the infection.They do that by culturing, or feeding the bacteria and when they are grown,they check them out on a microscope and do many tests on them.After that they test what kinds of antibiotics are suitable to treat that infection.She says that working with bacteria is very challenging because they have a mind of their own so her work days are never dull and boring.

On her letter,she placed some pictures of the typical Dutch symbol- flowers and the coat of arms of the Netherlands..She says the Keukenhof is a famous place which has a huge spring bulb display containing tons of flowers.

Her favorite tradition of the year has already passed (March 6-8).She believes it may be a cathollic tradition instead of a Dutch tradition.She says they call it a carnival and it's always celebrated 40 days before Easter and is three great days of fun.She always celebrates with her family.She also says it always starts with a parade on a Sunday to welcome the prince of the carnival.In the evening there are parties everywhere and if the weather is nice,there are marching bands playing on the streets.On the next day there is another parade with huge wagons and more marching bands.She also says that you cannot go to the carnival wothout dressing up,she was going as a mad scientist (isn't that her real job?). :) Then on Tuesday there is the children's parade and at the end of the carnival at midnight,all the marching bands gather around a central spot and sing one last song.In Louisiana,where I'm from,we call this carnival Mardi Gras (Fat Tuesday)....we have the marching bands and people dress up and throw beads,coins and other goodies.I didn't know they had the same tradition in other places,especially as far away as the Netherlands.On the last page of her letter, she attached some typical pictures of a girl wearing traditional Dutch clothes in front of a windmill and another picture of a boat with windmills in the background and also a newspaper clipping which told about a boy who stole a bicycle on his birthday.I guess he wanted a bike for his birthday and didn't get one. :(

She has also enclosed a beautiful postcard of Monnikendam.It is a part of the old city walls that were originally built in the 13th century and restored in 1947.She says there is a story going around that they used rye with the masonry to add in some of the old looks of it,since it was previously used.The contruction workers then arrived on the worksite the next morning with lots of damage done to the masonry.They suspected the local youth.The next evening they put a man on watch to look for the children, but found out it was sparrows that were attracted to the smell of the rye. :) She says you can still walk around what is left of the walls and that they made a pretty green zone around the walls,which are now beginning to fill with crocus flowers and it looks really pretty! 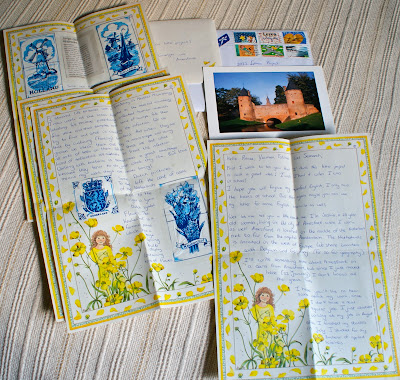