Letter #68 from The Netherlands

Letter #68 comes from Tijmetje,who lives in The NetherlandsShe is currently a student in the university.She is originally from Middelburg,which is a very nice city with many beautiful old buildings in the city center,although some have been burned down after the Nazi bombing in 1941,but many have survived.

She curently lives in Rotterdam where he goes to the university to study medicine.She is very interested in neurology,but doesn't know just yet just what type of job he wants to do in that field.She also enjoys playing the bagpipes.She actually wrote our letter while on the train to his weekly band practice in the city next to her hometown.

She says that the cities of Middleburg and Vlissingen are great places to walk through.Vlissingen has a nice boulevard and maritime museum.She says Middleburg has a lot of pretty houses and old buildings that are nice to see.Also,the old abbey is worth a visit,with the museum and the tower.Their market is great and there's a bookshop and old city hall that is very pretty to see.She says it has little statues near the clock that move with every strike of the hour.As for the rest of the island (which is no longer even considered an island),there are great beaches and it's a really great place to ride bikes.She also says that if you go north a little,you'll find the Delta Works,an engineering masterpiece that protects them from the sea.It was built after the 1953 flood,which killed many people and cattle.There is even a museum about the Delta Works.

Tijmetje also told us about the city of Rotterdam,which was also bombed in 1941.She says recently special lights have been put in the pavement to show which parts of the city burned down as a result of the fires started by the bombing.She also says you can look at this website here for more info about it.He says he saw photos of the city both before and after the bombing and ot was almost impossible to figure out where they were taken.

Rotterdam is a port city,the second largest in the world.She believes that their twin city,Shaghai,is the largest port city.There are also boat tours through the port.She also said that Rotterdam has many musuems,with his favorites being the Maritime Museum,the Historical Museum and the Education Museum.She also said that Boymans is great,as well.

She has shared quite a bit,so I regret not being able to share the entire letter,but he also mentioned some great things about the cities of Schiedam,Amsterdam and Haarlem,which all have very interesting things about them.She also told us about an awesome card that she has that gets her into many museums for free,which she uses quite a lot,I'm sure.

Along with his lovely letter,Tijmetje sent us a bunch of lovely ticket stubs,which we truly love collecting from all over,they are always so interesting to look at.Thanks so much for writing to us!Enjoy all of her goodies below: 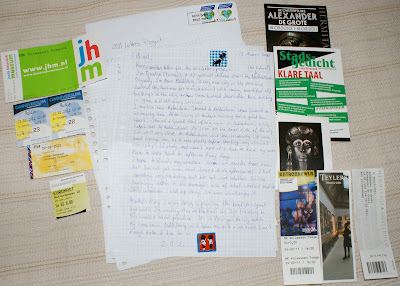