Letter #43 from the United Kingdom

Letter #43 comes from Sam in the UK.She's married with 2 beautiful children,one dog and two cats.Sam is a teacher (we need to start counting how many teachers have written to us since it's quite a few now) in a secondary school,teaching Health and Social Care to 16-19 year olds.She's been at this job for 14 years and says she loves it.

She says penpalling has been a part of her life since she was 14.she also enjoys decorating the paper she writes on as she did to our letter.She also swaps friendship books and decos.We used to swap those,also a few years ago,it was a great and fun way to make new penpals.

Sam enjoys walking in the fields behind her house to keep fit,along with playing on the Wii....one of our fave things to do,too. ;) She has given us some book recommendations: Helen Keller and The Diary of Anne Frank.

She tells us about a UK tradition,which is to have a Sunday Roast,including meat,Yorkshire pudding and veggies with gravey,but they don't have it on a Sunday,just one day in the week.When I was a kid,we used to go to my grandparents house for Sunday dinner,so that brought back some memories.She says that they do have a Sunday tradition in her house,in which they have bread pudding for breakfast,then homemade pizza (I love to make homemade pizza using bbq sauce instead of pizza sauce and then put tons of cilantro and cheese on top...yum!).

Sam's goals for the year include finishing her first year towards her degree in Education,enjoy her life and have less stress in her life so she can focus on her family.Those are some great goals...especially when it comes to stress. :)

When she wrote the letter,they were going to be going to some car boot sales,we call them garage sales here.I hope she found great deals.Enjoy Sam's beautiful letter,card and postcards below.Thanks Sam for participating! 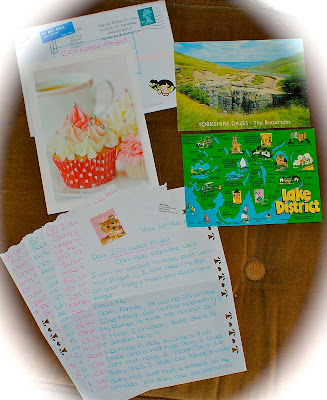