Letter #74 comes from Adam in Durham,North Carolina.He is currently a law student at Duke University.He started law school last year after working for a large public accounting firm for about four years.He says school is a lot more fun than work (I agree!).

Adam is originally from Kansas City and his wife is from Boston,but she moved to Kansas City when she was a kid.Together they have two children and a dog.He went to college in Utah (BYU) and then moved back to Kansas City.He says living in North Carolina was his first experience living in the south,although he says it doesn't really feel all that southern because of the people affiliated with Duke and UNC.He also says that he loves the warm weather there.

Adam was getting prepared for an oral argument competition the night he wrote our letter,so I hope he was successful!Thanks Adam for your letter!Enjoy his letter below: 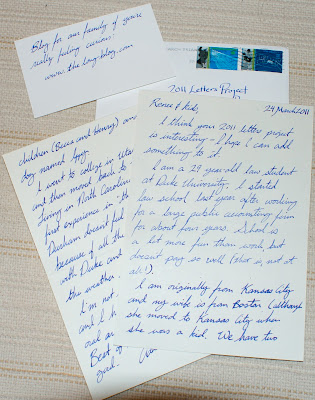