Letter #64 comes from Brian in Missouri (I always pronounce it wrong,as I'm sure many others do as well).Brian sent us a really interesting letter in which he printed out images and attached them to the letter where he talked about the photo.Ok,did that sentence even make sense?Anyways,back to the letter.Brian lives in Jefferson City,or "Jeff" for short.He says it's a small city for a state capital and has only about 40,000 people living there,making it the 7th smalles capital in population.An interesting fact that Brian told us was that his state is only one of five state capitals without an interstate running through it.He loves living in such a small city because there isn't traffic to deal with.His city is located just about in the middle of the state on the banks of the Missouri River.

He also says that the Missouri River was the route taken by Lewis and Clark when they left St. Louis looking for the Northwest Passage in 1804.They stopped at what became Jeff City and gave it its future name.

Brian gets to work in the capital a lot for a small Christian newspaper,which is located just a 10 minute walk from where Lewis and Clark landed.

Another fascinating fact he shares with us,or well,is trying to figure out for himself is why the state flag has two grizzly bears on it since grizzly bears are not native to Missouri.His theory is that bears looked a lot cooler on a flag than the state animal,which is a mule since mules aren't so tough and probably smell bad so it wouldn't go well with the "Show Me State" theme.You'd have to see the letter to get a good laugh from it. ;)

He also says that Lewis and Clark even got featured on Missouri's state quarter.He likes to pretend that they are on their way to Jefferson City....I must say,I think Brian must be very funny in person, because his letter is very animated.He says the Arch is also featured on the coin,but that it wasn't built until the 1960's.

Brian has lived in Jeff City for six years, but is originally from Oklahoma (my father is from there and all his siblings,except for one still live there).He does miss Oklahoma a lot but says that Missouri is very nice with nice people,but mention football and he pledges his loyalty to the Sooners (I'm sure Brian would get along great with my uncle who is a major Sooners fan,too)!

He says he loves our letter project because he loves to write.When we started our project,we really didn't think any men would write,we really thought letter writing was really a female thing but this project has shown us that there are many men out there that love to write letters,which I find amazing.I think writing is a good habit for everybody...it keeps your mind fresh and young. :) He says that he would get very excited when he was in college to get mail,but it was usually only a letter from his mom,once a week.When his sister went to college he got the idea to send her a piece of mail,but not just every week,every single day!Like he says,go big or go home!I couldn't agree more with that!

Anyways,he soon realized that he didn't have nearly enough to write in a letter every day,so after the first half of the year,he decided to switch over to postcards.They were a lot cheaper to mail,too.Every time he went somewhere or his friends travelled,he would get more postcards to collect for her.His sister graduated in 2009 and collected a grand total of 850 postcards from Brian.Is Brian not a super brother or what!? I think that is the coolest thing.I bet those letters and postcards really made each day special to her and it will be a memory she will never forget!He said he was worried because he still had 150 postcards left after she graduated,but then she decided to go to grad school (maybe she really missed the postcards) and so he had another two years of sending postcards to her and by this May,he will have sent her a total of 1,300 postcards!Is that awesome or what!I think he should win a brother of the year award or at least some guiness record for most postcards sent to a person. :) He says each postcard he sent her was different and the total cost of postage was $350....about the price of 2 college textbooks,right? :) He has also discovered postcrossing like we have and has gone nuts since then. :)

Back to his city,he says they have a German district called Old Munichberg.A lot of German immigrants settled in his city in the late 19th century.He says there are many German restaurants that are supposed to be really good is his area,but he hasn't tried them out yet,but is on his "to do" list.

Jefferson City is also home to the old Missouri State Penitentiary that has closed down in 2004.It was built is 1836 and some of its more famous inmates included "Pretty Boy" Floyd and James Earl Ray (the man who shot and killed Martin Luther King,Jr.He says it's now a tourist attraction that attracts many visitors.He thinks it's kind of weird that they would be so thrilled to show off the gas chambers...I told you Brian is very funny in his letter!

Sometimes Brian works in Hannibal,which is the hometown to Mark Twain/Samuel Clemens.He says they have a riverboat that will take you up and down the Mississippi River.Then in St. Louis is the Gateway Arch that is well known and of course,the St. Louis Cardinals are there.Another popular city is Kansas City,which is obviously well known for their BBQ.All of these cities are just 2 hours away from where Brian lives,which is really convenient.He also mentioned the city of Fulton,which is 25 minutes north from him.In Fulton there's a Winston Churchill Museum that's really cool and is on the campus of Westminster University,which is where Churchill gave his famous Iron Curtain Speech in 1946.Brian says that if you have any interest in WWII ,the Cold War or Churchill,then you must visit Fulton.They also have a section of the Berlin Wall there,too.As you might have guessed by now,Churchill is Brian's favorite historical figure and loves his quotes that he shared with us and you can see in the pictures below.He became interested in Churchill when he was in London.

I think I will have to stop now as my fingers are about to fall off since Brain had so much to say.Thanks Brian for a VERY interesting letter,brochures and postcards.Also,forgive me for any spelling mistakes since I think my eyeballs have also fallen out. :) Please do feel free to share our project with your friends!Enjoy all of Brian's (here's your shameless plug ;) ) goodies below: 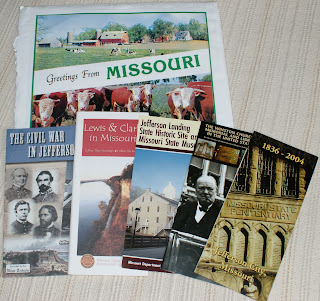 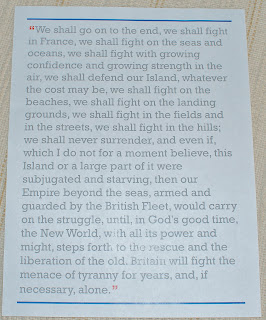 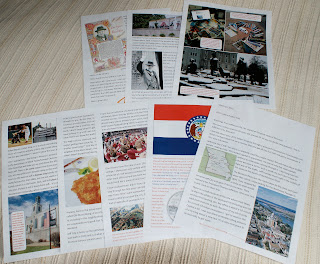 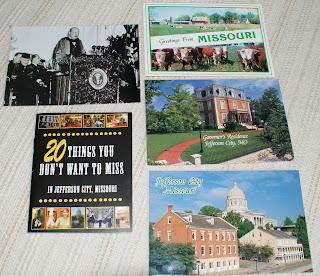 Email ThisBlogThis!Share to TwitterShare to FacebookShare to Pinterest
Labels: missouri