Letter #42 comes from Doug in Honolulu,Hawaii.Aloha Doug! When I first saw his letter,I had to look three times because I seriously thought that he some how stamped the letter, but no,it was his beautiful handwriting!My daughters and I were just amazed at how neat it was,it was and is so pretty to look at.Ok,let me get to the letter now. :) He lives on the side of a hill on the 11th floor of his building,so he has a great view of the city.He can also see the famous Diamond Head,which I believe is a state monument.He can also spot out the condo that Barack Obama grew up in,just a mile from his place.

He says he was born in Hilo,where it actually rains a lot...I guess most people expect to see only beautiful weather in Hawaii,but he enjoys the rain.Like he says,without the rain,you won't get all the beautiful plants growing.We love rain,too,but don't get much here where we live.

Doug enjoys writing letters by hand and using fountain pens.We really need to practice using our fountain pens.He said that the ink he used on our letter is an American ink named after a Japanese sailor who was shipwrecked and rescued by an American whale boat.Quite an interesting thing I think.He was schooled in America but went back to Japan.

Doug has Japanese ancestry,his grandfather was from Japan and came to the states at the turn of the 20th century.I'm not sure if he has any relatives left in Japan and I really hope not after the terrible tsunami,if so,hopefully they are ok.I'm sure he will comment to let us know, I'd also like to know if he's ever been to Japan or plans to visit any time soon?

Doug has enclosed a beautiful picture and postcard of his area...I don't know if you can see it,but you can see Diamond Head in the far back of the picture.Enjoy his very beautiful letter and pictures below.Thanks Doug for such a beautiful letter and pictures!I know many people in Hawaii are of Japanese ancestry,so I hope that they all have been in contact with family members.We continue to keep the people of Japan in our prayers and I'm so happy that Hawaii wasn't hit with a bad tsunami.Meke aloha pumehana to you,too,Doug,which means with warm aloha! :)

PS-Sorry for the bad pictures,you should be able to click on them to see a larger image. 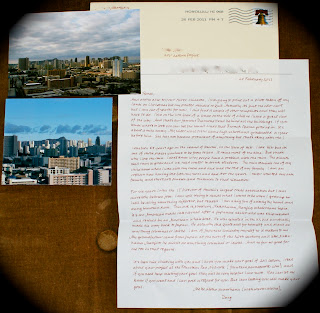 Email ThisBlogThis!Share to TwitterShare to FacebookShare to Pinterest
Labels: hawaii