This letter comes from a new friend named Irene and she lives in Ukraine.She has made a wonderful little notebook filled with information,which I will show you below and explain what she wrote in case it is hard for you to read. :) Please forgive me as I have actually uploaded them in the wrong order and it will take too much time to fix it.So here goes Irene's fabulous notebook.
This is actually the last page: 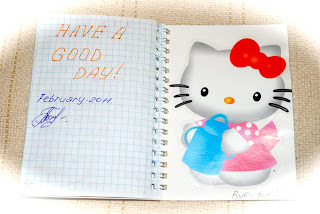 On the pages below she metions that she loves the cinema,books,music and dancing.She believes in love and friendship and enjoys looking at the stars in the sky. 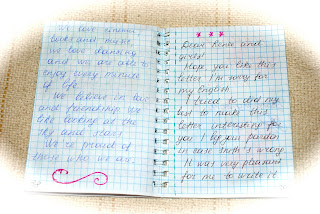 On these two pages she tells us the Ukrainians are happy people who love life,laughing and having fun.They are also open-minded people who love to smile a lot and sing.They also enjoy nature and just the simple things in life. :) 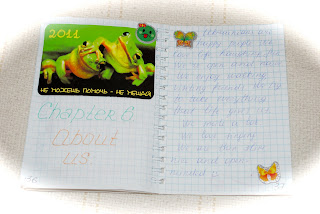 Below is a picture calendar with a horse and on the left side is a bus and trolley bus ticket and subway token that she placed in the "open me" piece of paper. 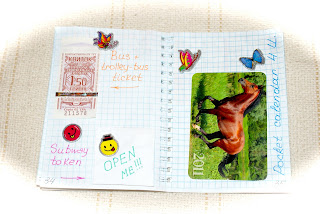 On the left is a packet of Greenfield tea and on the right is a receipt from an average trip to her post office...we won't share mine. ;) 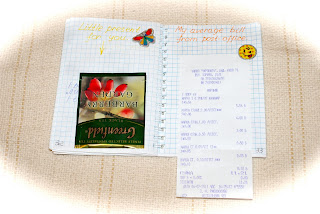 Below on these pages she writes about how low their salaries are and how things are very expensive there.It is very hard for anybody to own a house in Ukraine unless you are lucky enough to be rich.Some of the prices she shared with us are below (keep in mind that it's cheap to us, but not to people who make way less than we do):
-7 day trip to Paris- $600-$700
-3 roses $6
-1 letter mailed overseas- $.60-$1.50 (here we pay $.98)
-woman's haircut- $5-$7....this is for the cheapest place
-1 year in the university- $750 (I wish it were that cheap here,we pay about 5 times that amount per semester in the states,depending on how many classes you are taking,of course.) 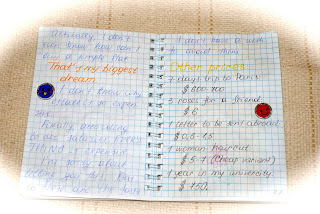 On these 2 pages below she shared how to write a few things in I believe Ukrainian and Russian and then in English.I think you can click on the picture to see it better. 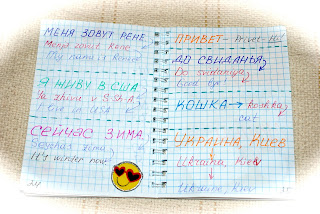 Below is the Russian alphabet: 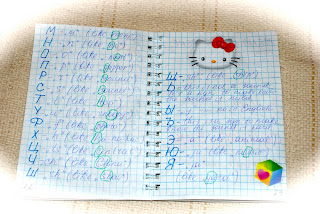 More Russian alphabet.Irene says that a lot of Ukrainians speak both Russian and Ukrainian easily. 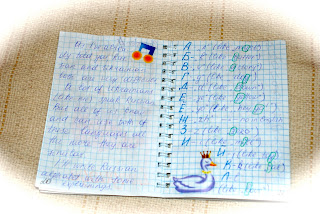 Below at the top of the picture is a children's book that is so cute.Below that the notebook describes her city.Irene lives in the capital,which is Kiev.She was born in Moscow,but moved to Ukraine as an infant.She says her native town is called Mariupol,which is located on the coast of the Sea of Azov.There are about 450,000 people there.She says she has always dreamed of living in a big city because there is much more to discover...I agree. :) 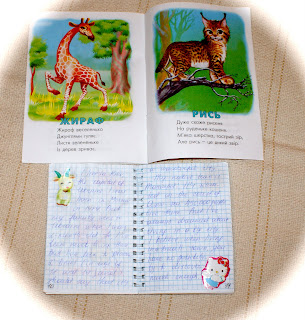 In the notebook below on the left she says Ukraine has 2 beautiful seas,millions of impressive landscapes,developed infrastructures and most of all beautiful girls! ;) I may have to beg to differ with her there,right? lol! In her defense,she did continue on to say that America has beatiful girls,so don't go after her,ok?Thanks! :) 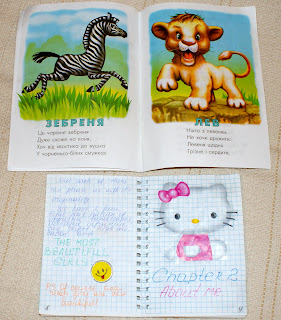 Below she mentions some of the biggest cities in the Ukraine,such as Donetsk,Khar'kov,Dnepropetrovsk.Some of the things they are known for are agriculture,light industry and ferrous metallurgy.She also mentiond how most people in Ukraine live below the poverty line.She also says that they have some of the richest soil in the world! 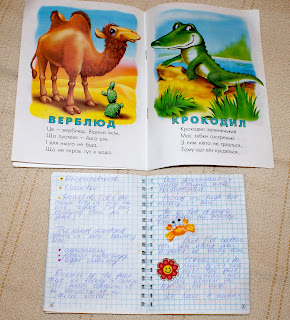 Below she mentions that Ukraine is a big country situated in the eastern part of Europe with 47 million people living there.Her country is a former part of the ex-USSR,so they have a close relationship with Russia and Belarus.For example,they don't need a visa to travel to those places.She also notes that Ukraine is divided into 47 regions and the Krimean peninsula is an autonomous republic.Ukraine has been an independent country for only 20 years,but has an ancient history. 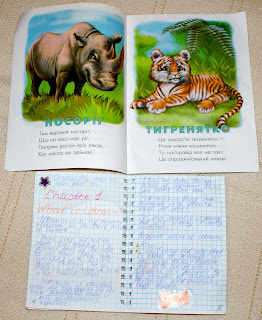 Below is a wonderful picture of Irene in a tree (in the notebook). :) 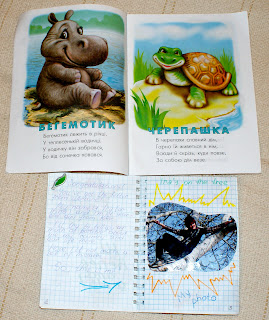 Below is the beginning of the notebook. 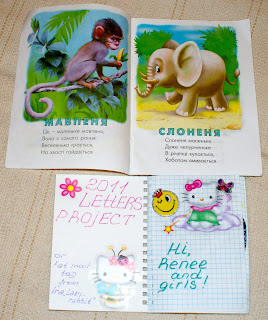 And here is everything she sent us.Thanks Irene so very much for your wonderful and creative notebook telling us about your fabulous country!And thanks for the stickers,book and postcards...we loved it all! 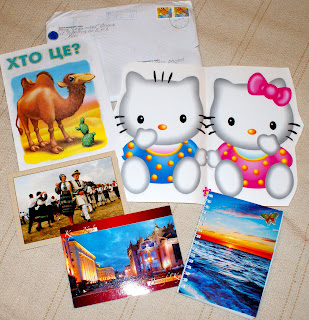 Email ThisBlogThis!Share to TwitterShare to FacebookShare to Pinterest
Labels: ukraine