Letter #33 comes from someone simply known as "The Fruid" in California.It's quite interesting when they don't say their name...makes them seem mysterious since you try to figure out who they are by the alias they pick.I do know this about her,she has amazing handwriting!It looks like she stamped each word on the letter,that's how neat it is!
Anyways,more about her letter.As stated,she lives in California in a city called Livermore.She remembers it being a small town of 25,000 people but now has around 85,000 peoople.She writes about having a few shops downtown when she was a child,but now things have really changed with even more houses and an outlet mall opening up soon.
Her favorite thing about her city is its natural beauty.She lives in a valley surrounded by hills (so are we).There are also many vineyards in her area....our backyard has a lot of vineyards,too...the previous owner used to make wine in the backyard.But we don't really care for the grapes...they are usually pretty sour.I think I have a picture of our vineyards I will post below.
She also says the Livermore is known for 2 things-their wineries and their national labs.She is really concerned about living so close to nuclear labs.
She enjoys hiking on the trails that look out over the valley.She often sees many different animals,such as deer,turkeys,coyotes,turkey vultures and hawks while hiking.There are also many warnings about mountain lions,but luckily she has not come across one of those yet.I think I agree with her,that it may be best just to see them at the zoo. :)
Livermore has a lot to do and is close to San Francisco...it's only 50 miles east of the city and 45 minutes from Six Flags and Great America and only a few hours from the city of Monterey.Seems like she lives in a great area.
Below is a picture of her lovely letter,picture of Cresta Blanca hillside which if you look carefully,you will see 2 gnomes shaped out of the crevices....do you see it...it actually shows up great here,when I was looking at the picture in my hand it took while for me to see both of them. :) 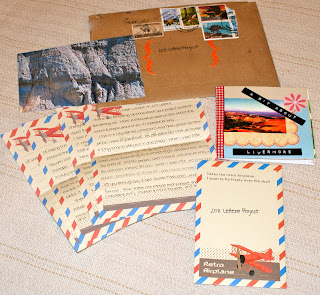 The Fruid also made a really cute mini scrapbook which I am sharing below:
This one shows a farm in Livermore: 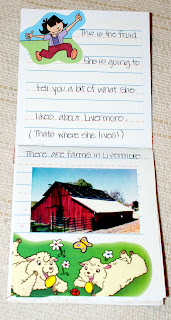 Below is a vineyard and some windmills on a hilltop:

Here is a lake and a sign for the rodeo: 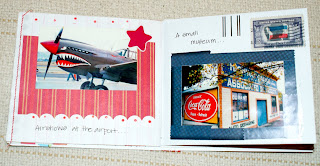 This below is the coolest thing,a lightbulb that is 110 years old and still works!Sheesh,most of my lightbulbs don't even last 2 years! :) To the right is a picture of downtown:

And below is the end of her notebook which is so cute...it reads, "But what Livermore is really missing is YOU!" Aww,that is so sweet!

Many thanks to "The Fruid" for your wonderful letter and picture and the adorable scrapbook that you made....we really loved it!Thanks so much for participating and sharing about your city!
Ok,well,I found a picture of our backyard showing the grapevines but this is a winter picture,so no beautiful grapes to look at right now.It's on a big hill so that is why the picture looks like that.We also need to work on making it neater...we've just been busy with our house repairs.We have 5 rows of grapevines plus some that cover this clothesline that you see closer to yourself in the picture. 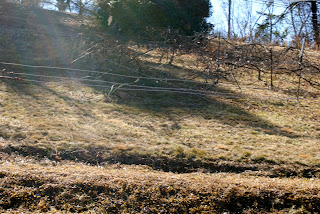