Letter #77 comes from Kelly in Canada.She lives in Camrose,a city of about 1,700 people and is located about an hour southeast of Edmonton,which is their provincial capital.She often goes to Edmonton to shop,go to concerts and attend sporting events.Her brother and her like to see the Edmonton Oilers hockey games.She has also been to a lot of concerts,seeing groups like Brooks and Dunn,ZZ Top and more.She really loves the music that came out before the 1980's.She says that if the singers aren't old enough to be her parents,then she doesn't listen to them because she doesn't like the more current music.

Kelly also plays the flute in the Camrose District Community Band.They are a group of non-professional musicians who play concerts for the public at different times throughout the year.When she wrote the letter,she was preparing to play at their annual formal concert at the university,which is where they get the best audience.Their members range in age 18-80.She says they had a person who was 91 that played the clarinet,but had to stop when he became ill.

Kelly loves to watch tv and read books.She says she will pretty much read anything,but her favorite genre is mysteries and non-fiction.She also loves reading about history.Lately she has been reading about the American Civil War.

During the summer she loves to go on road trips,it doesn't matter if it's only for a few days,she just loves to get away.She has taken us a on a little "tour" of Alberta.She first tells is about Banff and Jasper National Parks.Driving through the Canadian Rockies on the Icefields Parkway between the towns of Jasper and Banff has one of the best tours she says we can take.She says you can take a special bus that will take you right up to the glacier.There are also several lakes and waterfalls that you can also see.Both Jasper and Banff have a tram that will take you up a mountain for fantastic views.They also have great resorts for people who like to ski.

If you visit the town of Drumheller,you'll find lots of dinosaur and other fossils that have been discovered.The Royal Tyrell Museum of Paleontology is located there.There are some awesom dinosaur skeletons,dioramas and fossil displays there to see.There are even dinosaur statues throughout the city.You can even go inside the dinosaur statue at the Drumheller tourist information center and walk up to the viewing platform,which is in the dinosaur's mouth.

Kelly says that for some reason Alberta has a lot of towns that have interesting statues or some type of roadside attractions.Last summer she went on a little tour of southeastern Alberta to try to see as many of them as she could and she shared some of the pictures of them with us in her letter.She even bought a stuffed Ernie to that goes on family trips and is photographed everywhere he goes.She says that Ernie is quite busy.He's even going to Hawaii!

She also said that if you go to Canada,you have to stop at Tim Horton's (we had one on our city in Michigan,but not down here in VA).She also noted that the area northeast of Camrose was settled by lots of Ukranian immigrants,so you can see some statues that represent their presence in the area.She has also taken a picture with a goose statue in the town of Hanna,where she says the band Nickelback is from.

Kelly also tells us that Camrose is known for the Big Valley Jamboree,a three day outdoor country music festival.It has been going on fr 18 years now.There have been many country stars that have performed there over the years,such as Keith Urban,Brooks and Dunn,Randy Travis and many more.Also,in Edmonton,you can visit the West Edmonton Mall,she enclosed a directory to the mall and I must say there were a lot of great stores there that made me want to take a trip there.I wish we were back in Michigan so we would be a lot closer.There is even an amusement park and waterpark in the mall!How cool is that!?She says she is going to play tourist in Edmonton this year.She said something I really agree with,which is that we often look for places to visit outside our city or nearby areas and we miss out on some great things that are basically in our own backyard.I know there were many places we wished we would have visited while in Michigan,but we would go to Ohio or visit Chicago so we could see another state.Now I wish we would have spent more time exploring Michigan because they have a lot of great things to see.

Kelly enjoys plants and works in a flower shop.She would like to visit the Muttart Conservatory in Edmonton,which has four huge glass pyramid-shaped greenhouses that each feature different types of plant displays.

Along with Kelly's lovely letter,which she also wrote on a cute paralymic games card (we love cute olympic characters),she also enclosed a couple of brochures and some postcards and even a picture of the Olympic torch that went down main street in Camrose during the cross Canada torch relay.Thanks Kelly for the lovely letter and goodies.Enjoy all of her goodies below: 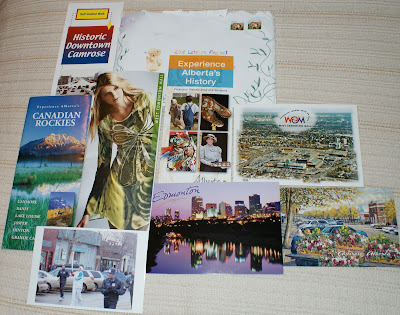