Letter #46 comes from someone in Springdale,Arkansas.The writer lives in the northwest corner of the state.I'm having trouble reading the name,so maybe you are reading this and can tell us your name? :) She tells us that Arkansas is a strange state in the sense that  it is very different geographically-the eastern part is flat and poor and known as the Delta,the middle part is more traditional,while the southern part is more "Old South".She lives in the lovely Ozark Mountains.

She tells us that there are a lot of big businesses there,just about every company you can think of,from Pepsi to Johnson and Johnson and even Disney.That is definitely something I never knew,although I did know that Walmart is there.

Even though her area is "big business",you can still find that southern hospitality,finding people drinking iced tea and eating fried green tomatoes...we've never had fried tomatoes of any color....sounds interesting.She says they have an annual tomato tasting with over 40 varieties of tomatoes!

Her area also has a lot of trails,streams and mountains that adds to the beauty of her area.

She described the postcards she has sent.The one of the wax statue is of General Hindman from her local Civil War Park,which she says there are a lot of in her state.She said that was the first postcard like that that the employee had sold in years,so maybe he isn't too popular. ;) She said that Northwest Arkansas was ocupied by both the Union and the Confederate forces and that there are huge cemetaries for both sides.

Also included were postcards of her hometown,Fayetteville.One shows the main street of the town and a few blocks from there is Wilson Park Castle,which is on another postcard.Another postcard shows the town square from Thanksgiving to New Years which houses the 'Lights of the Ozarks". Another postcard features the Inn at the Mill,where she says a lot of celebrities stay when they are in the area.The other card shows Hendrix College which is located in Conway.She says its a very gorgeous campus with beautiful landscapes and buildings.Another postcard we found interesting was the house where the Clintons first lived and got married in...it's now a museum.The last postcard features Mrs. Pankhurst addressing the public as part of the struggle for the right to vote.There are times when I wish we had a time machine to see the past so we could see just what people had to go through to give us the life we live now....we should all be thankful for all the rights we have now. 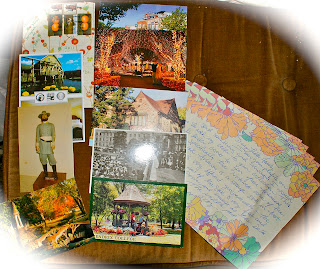 Email ThisBlogThis!Share to TwitterShare to FacebookShare to Pinterest
Labels: arkansas