Letter #54 from The Netherlands

Letter #54 comes from Telenn,who lives in the city center of Vlissingen,a city along the coast of Walcheren,a region of Zeeland.Zeeland is one of the 12 provinces of the Netherlands and it's name means Land of the Sea.Zeeland is a group of islands.She says that even around 4400 BC there were people living in the area.Around the year 0 the sea got a lot of grip upon the land and that led to many creeks and coves forming and a large island group was founded.

She also says that the people founded small villages,which formed the base of a lot of villages of today.After a struggle betweeen the Dutch and Flemish Earls and the Dutch Floris and William III won.They decided to build a couple of towns with a harbor,including Vlissingen.In the year 1315, the city got its city rights and a church was built (St. Jacobs Church),which she lives close to.The harbor then needed to grow and there was some serious competition with Slais,another harbor city.Philip of Burgundy gave permission to build a wall around Vlissingen,with a gate.The prison tower which is still standing today is a reminder of that gate.She also says the Vlissingen played its part with the East and West Indian trading company as well.The city was really flourishing!

But in 1795,Napoleon wanted to conquer England and took over Vlissingen,which was a strategic place.In 1809 an English expedition burnt the city hall,2 churches and 65 houses,and many more homes damaged.In 1807 Napoleon tried to expand the city,but thanks to the English,he left in 1816,leaving Vlissingen in need.Around 1867 the city was rebuilt again and the city was flourishing again.

Then the second world war started and Germany invaded the city on May10,1940 and the city was bombarded.Only one house was undamaged,so they had to rebuild the city again.The city center then changed into an area with all kinds of shops.She says she lives right on the center and that the harbors are gone, but a small marina and dockyard stll exist.The prison tower she mentions in the letter is now a restaurant.

She also tells us that there is a Dutch hero from Vlissingen named Michiel de Ruyter,who was born in 1607 and lived close to where Telenn lives now,actually just around the corner from her.She says he was  a bit of a troublemaker.He travelled a lot,became a sailor and also joined the Navy and was promoted as admiral.He fought many battles at sea and also got a nobility title in Denmark for his part in a battle in Scandinavia.He died from his injuries when he was almost 70 years old in 1676.You can see his statue on the postcard she has enclosed.

She then goes on to tell us about herself.She is not allowed to have pets where she lives,but wants a cat one day.She does however, have two African Dwarf frogs and three red corn snakes.She says all they do is sleep all day.I guess if you don't have to search for your own food anymore, you can sleep all day. :). They feed them mice and she says they are great pets for people with allergies since they shed skin,not hair.She also says that they are so easy to take care of,you don't have to walk them or worry about finding a sitter for them while you are on vacation. :)

She also tells us that she has three jobs in the field of education.Ons of her jobs is an educational assisitant at a primary school.She also helps a student after school and she also works at a regional study center..At the regional study center she helps different groups of people,some are metally disabled and some of the people have come from other areas,so they need help learning Dutch.She is quite busy with her jobs.

In her spare time she loves to read.When she wrote the letter,she was reading a book called The Wind Singers by Megan Lindholm.she also loves to draw,listen to music and take photographs.She also enjoys travelling and has been to Paris and Berlin and will be visiting France this year.

Telenn has also included some stickers for my daughters,some tea bags,a postcard and a printout of some pictures she has taken.Thanks so much for the lovely letters and goodies.Enjoy all of her goodies below: 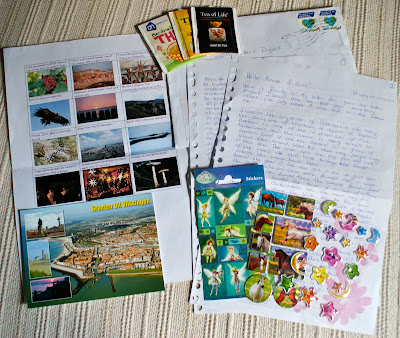