We received this envelope from a previous writer who works with the elderly and promised to have some of them write us letters,but since they couldn't write,Rachael typed up what they told her so that they could be a part of our project....how wonderful!

The first letter,letter #72 is from Teresa who says she is 78 years old.She left school at the age of 14 to work and her wages were 17 schillings and 6 pence a week.After working one year,she would get a raise of 2 schillings.She worked in Hunters,which was an old fashioned grocers and worked half days on Thursdays.The store had men who went around town collecting orders and Teresa and the other workers would put them together,She worked during the time of rationing and they had a box with an electric light in it.

On Saturday's she said a man named Davy Ray,who was the rat catcher would come in and they would close the door to the store room so the customers couldn't see what was going on.Then Davy would let his two little dogs loose to catch the rats.They would even find mice droppings in the dry goods but they would have to sift the food,such as the rice and flour.Since there were no refrigerators at the time,the meat would be hung up and would have maggots all over it.The would get rid of the maggots by using vinegar.I don't know about you,but I think I'm thankful I didn't have to grow up during that time.

Teresa also said that during the rationing,you got 4oz butter and 2oz of lard per person.Everything was rationed.After working in at the grocers,she worked at a pork pie shop on the same street.She would ask people,"Pork,beef or tomato sausages?"She would put the jelly in the pork pies through a hole in the top.

Teresa has lived all over the country,Ireland,Oxford,Plymouth,Barrow-in-Furnes and Hinckley.Thanks Teresa for sharing your story with us.


Letter #73 is from a lady named Kath,she's 76 and was born in Wilesden,a little village near Bradford in Yorkshire.She lived there until she was 11 and then went to Keighley Girls Grammar School.She also went to PE college near Sheffield for 3 years.From there,she went on to teaching college near Matlock.She was connected with the Methodist Church and from there she went to Sierra Leone.She was at a girls boarding school about 200 miles from Freetown.She taught all subjects and they had very little equipment.She stayed at the school overnight and most of her students stayes nearby or on school grounds.She says the students were very loving and generous.When she would check the school at night,she would have the company of Jasper the dog and a cat,whose name she cannot remember.The cat was great for helping get rid of the rats.

After that job,she got a job in High Wycombe,Buckinghamshire.This time she taught 11-12 year olds.She says she was a little behind in what was happening in PE and had never seen people use climbing bars.She taught PE to the girls along with a few other subjects.The boys had a different teacher for PE.

Kath loved to go on days out to the Lake District and especially enjoyed walking around the lakes and mountains.She says it's a very beautiful place in the summer.Thanks Kath for sharing your story with us!

Enjoy their letters and goodies below: 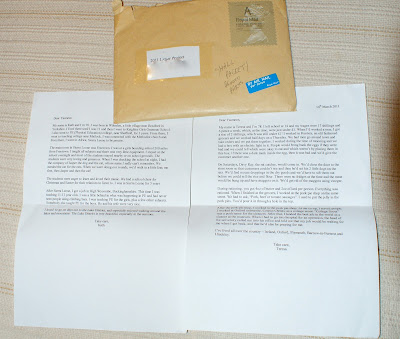 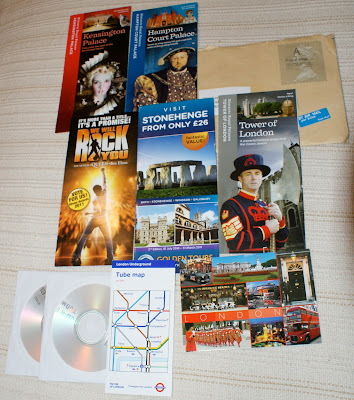