Letter #78 comes from Diana in Russia.She lives in the ancient city of Veliky Novgorod in modern Russia.She says that in everyday life there are several traditions.For example,she says that children can live with their parents until their marriage,which is usually between the ages of 23-25.

She also tells us that  a lot of Russians have a cottage or "dacha" with a vegetable garden and Russian baths.They grow a lot of different vegetables and fruits and enjoy making marinades and jams with them.They like to eat it in winter time.

In Russia tea is served after meals and during mid-afternoon breaks.Instead of having the English "five-o'clock tea",they have tea at any time during the day and anywhere,even in their car,that's how much they love tea.When friends visit somebody,their hosts greets them with a cup of tea and cookies,sandwiches,or other goods.Each feast ends with tea drinking and cakes and candies.They also love to add honey to their tea,it isn't put into the glass with the tea,but served in a bowl or special vase.Russians also enjoy lemon with their tea.

She also told me something really interesting,that Russians really love to read books and will usually read on public transportation.You don't see many people read in public here.I think that is really great because it becomes a great habit for everybody.She also told us that Russian baths is an ancient part of their way of life.It's the best way to communicate with friends.

Kvass is the Russian national beverage,sometimes called a bread drink in English because it is a fermented beverage made from black or regular rye bread.The color of the bread affects the color of the drink.It is usually flavored with strawberries or mint.

Diana says that Russian culture is rich in different traditions including winter folk amusements:troika sleighing,skiing,skating and sledding,dancing near the open fire,telling fortunes at Christmas-tide, and meeting the Ded Moroz.

She says that Ded Moroz is a fictional character similar to Santa Claus.He is said to deliver gifts in person at New Year's Eve parties and other New Year celebrations.Russia is an orthodox country with a lot of Christian holy days,but there are some other non-Christian holidays,too.One of them is Ivan Kupala,which has been celebrated since ancient times at the end of June.On that day,people wear girths of flowers and wreaths of herbs.They sing songs,stoke bonfires with poles topped by a burning wheel,the symbol of the sun.On Ivan Kupala,girls make wreaths of herbs and in the evening,float them in water.If the wreaths sink,it's the end of love and there will be no wedding.Nobody sleeps during the night of the holiday because it is believed that all evil became active since it's also the day when the evile beings (witches,vampires,etc) have their holiday,too and would try to cause as much harm to humans as possible.

Diana says that the most cheerful hoiday in Russia is Maslenitsa.The rituals are very unusual and interesting because they combine the end of the winter holiday rituals at the opening of new spring festivals and ceremonies,which were to promote a rich harvest.It is celebrated during the week preceding Lent.Now they only celebrate the holiday on the last day,which is a Sunday and the day was named "forgiveness" because people ask each other for forgiveness for all the trouble,etc they have put on others.To say goodbye to Maslenitsa they have a solemn burning of the stuffed figure of winter.Everybody bakes a lot of pancakes with different fillings,such as meat,caviar,salmon,cabbage,mushrooms,sour crea,honey,jams,etc.I have never tried a filled pancake but actually saw a baking pan for those types of pancakes and was quite curious about them.Maybe one day I will try making some.

Diana has also been so kind to print out some Russian fairy tales for us to read,which we loved.They are called The Little Round Bun and Masha and the Bear.She was even kind enough to send us the book of the Russian fairy tale called Masha and the Bear since we are trying to collect children's books in different langauges.Thanks so much Diana for your lovely letter and  beautiful book that we will treasure!See her letter and book below: 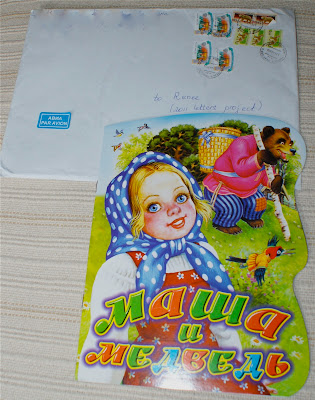 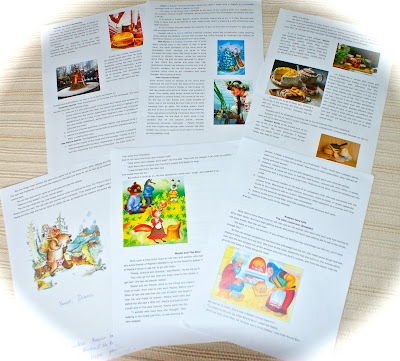 Email ThisBlogThis!Share to TwitterShare to FacebookShare to Pinterest
Labels: russia