Letter #58 comes from Manuela who lives in Germany.The name of the city she lives in is called Freiburg.She has 3 lovely cats that she considers her children.She loves writing letters and postcards,reading,travelling,sports,music,everything about India,Hello Kitty,Diddl and she is also interested in animal protection and animal rights.

She has lived in Freiburg since 2001 and really likes it.It is located in the southwest part of Germany.It's also called "Black Forest" and is very well-known in other countries and is a popular place for tourists to visit.Her city has 220,000 inhabitants and is near the border of France and Switzerland.Many people in her city speak French.The city is about 900 years old and its landmark is Freiburg Minister.The church's tower is 116 m. high and from the top you can see a great view.They also have many museums,a theatre,historical buildings and lots of good restaurants.

The name "Black Forest" came from the Romans who named it that because of the thickly forested mountains that had dense growth of conifers and other trees so it blocked out all of the sunlight inside of the forest.She mentioned some things that we may be familiar with that came from her area,such as the black forest cake,black forest ham and cuckoo clocks.

She says that Freiburg has two sister cities,one in Madison,Wisconsin and the other in Guildford,England.

One of the items she enclosed was a timetable for the trains since it's very important for her because she works at the German railway called Deutsche Bahn.Her job is to announce over the loudspeaker when a train leaves,arrives,is delayed,etc.She says she loves her job and that it's a great job for women since she gets to talk the whole day. :) Sometimes she works as early as 5am or as late as midnight and she also has to work on weekends and holidays.

One of her favorite countries is Greece and she says she has been there a few times already and that her next trip is to London.She is really looking forward to that trip.I hope she has a lot of fun.

Manuela has also written some German phrases for us in hher letter and also attached to the letter a 1cent Euro and 2cent Euro.Along with her fabulous letter,she sent us the cutest Diddl bags (I never knew Diddl was from Germany),the last time we were able to find Diddl in the stores here was probably 6 years ago and we never saw it again) :( She also sent us a children's book in German since we are trying to collect children's books in every language,some very cute stickers,postcards,a picture of her cats, and of course the railway timetable I mentioned earlier.Thanks Manuela for the lovely letter and goodies!Enjoy her goodies below: 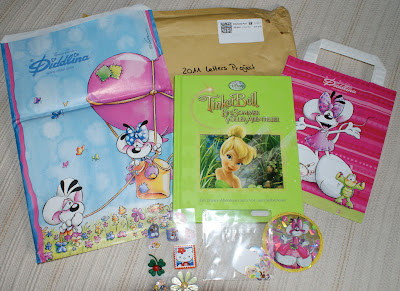 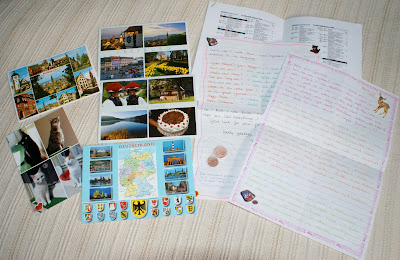 Email ThisBlogThis!Share to TwitterShare to FacebookShare to Pinterest
Labels: germany