Letter #55 comes from April in Los Angeles,California.She has lived there for about a year now but has lived all her life in Southern California.She says she loves living in Los Angeles because there are so many culturally fun places to go.Last summer she had a to do list and visited many places,including the Mummy Exhibit at the California Sciencenter,the mammal exhibit at the Natural History Museum,visited the zoo and also went to the Griffith Observatory.There are some places she didn't get to see,so she will be doing them this summer..

April is currently working on her Special Education teaching credential at California State University.After this quarter,she has one student teaching left to do then she will be credentialed.She has also received her bachelors and masters degree,so she will be happy when school is over.She currently works as a unit secretary in two different emergency rooms.She says it's very exciting and fast paced.She says she will miss ot once she starts teaching.

She also enjoys reading and is currently reading a book called The Unbearable Lightness of Being by Milan Kundera.She is reading it as part of her book club along with a doctor at one of the ER's she works at.Last year she read 42 books!That's amazing! I need to set a goal and stick to it.My only problem is finding books that I like and I am usually bad at judging a book by its cover,which is a bad habit to have because I know I have missed out on good books because of that.She doesn't watch much tv,but loves all kinds of movies.Her favorite is a French film called Amelie.

She is thinking of moving to Colorado Springs this summer since it's going to be very tough to get a teaching job in California with their bad economy.I wish her all the best since most cities have been cutting a lot of teachers jobs,which,in my opinion should be the very last thing that should (if even) be cut.With our education system so bad in our country,the last thing we need is less teachers for our kids.

Thanks April for your lovely letter,postcards and pictures.Also congratulations on the birth Logan who was born on 2-12-2011!

Enjoy her letter and goodies below: 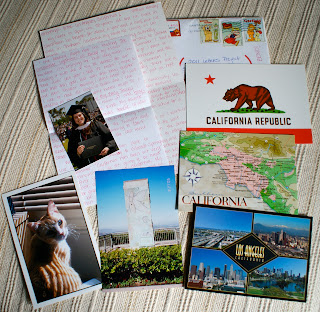