Letter #86 comes from Claire in England.She lives in Leeds,which is in the northern part of England.She grew up in Coventry,which is a smaller city right in the center of England.Coventry has about 300,000 people and is thought to have been a settlement during the Bronze Age.It was bombed heavily during WWII,so very few original buildings remain.The city was then rebuilt in the 1960's and 1970's with an abundance of concrete.It wasn't nice to look at so she knew she wanted to live elsewhere.

She has travelled around Europe with her best friend and they saw many different places,including Amsterdam,Berlin,Prague,Budapest,Salzbur,Rome,Venice,Verona,Florence,Sorrento,Nice,Paris,and the Jura.She says it was the best experince ever.I think that would definitely be on the top of my amazing things I did list. :)

She moved to Leeds to start working on a degree in Linguistics.She fell in love with the area and her four years of school flew by.

The population of Leeds is around 800,000 and is much larger than Coventry.It is the largest center for business,legal and financial services outside of London,there in the UK.She says that Leeds has so much to offer and so many different students to mingle with.She says that even though the city center is huge,but in only a 10 minute drive,you can see beautiful fields and countrysides and is only an hour from the seaside.She says the weather is not great and most days can be described as dull,gray and miserable.

Claire has gotten engaged last year,but has no wedding plans just yet.She says they have a lodger that she lived with for 3 years in university accomodation and is working to become a midwife.They also have a guinea pig.

She got a part time job working in local prisons and then decided she wanted to work with offenders and has been trying to persue that career ever since.She works full time with the parole department and she wants to be an officer one day.She also volunteers some evenings with young offenders (ages 10-16...yes she said 10) in police stations.She also enjoys writing to people in prison since she knows it can be very lonely.

Claire is also currently studying for a degree in Criminology and Psychology.She also says she is quite the night owl and loves to go to gigs and night clubs.Her favorite musician is Leonard Cohen.She also loves tattoos an has about 8 of them,one of which she sent us a picture of.

She loves all things vintage,such as cupcakes and old jewelry.Her main interest is photography.Her and her fiance love to collect old and toy film cameras.I have one of those Diana cameras that does lomography but haven't used it yet,but we've seen so many cool pics with the camera,that we just had to have it.I love to collect cameras myself.

Oh,she also sprayed the letter with her favorite perfume,Issey Miyake L'eau D'issey.I will have to see if our stores sell it so I can sample it. :)

Thanks Claire for the letters,card, brochures and pictures that you all can see below: 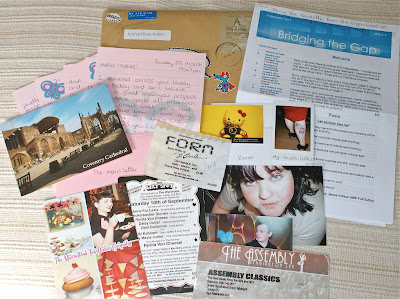