Letter #120 comes from Emilie in England.She is from a historic market town called Bicester,Oxfordshire,England.She has been there for only six months now.The population is just under 30,000.The name Bicester comes from Latin,meaning "2 forts"

Bicester has two train stations,Bicester North has trains going to London and Shropshire Bicester going direct to London.She lives in an area with a lot of tourist attractions,like the Pit Rivers Museum (which she included pictures of).

She also told us that Bicester is in the Doomsday Book of 1086,recorded as Berencestra,two manors held by Robert d'Oily who built Oxford Castle.

Emilie's hobbies include photography,writing letters to her big sister (how sweet!),who is the one who told her about our project (thanks to her!)

Thanks Emilie for your lovely letters and wonderful photos and postcard!She included photos of Big Ben,London Eye (two things we'd love to see in London),photos from the museum,picture from Kew Gardens and some photos of Oxford City Center, and a postcard of the Roman Baths,which looks so beautiful!Enjoy all her goodies below: 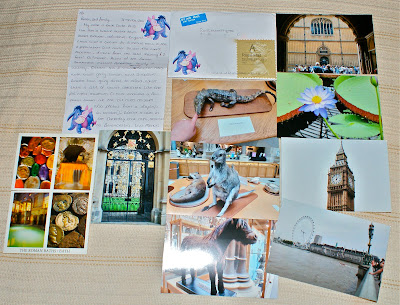