Letter #123 comes from Abigale in England.Abigale works as a cook and says she has always loved to cool.She can remember baking in the kitchen with her mom when she was little.She even told us that come May,she will be working as a chef at Jamie Oliver's Italian restaurant.Now that is amazing!Congrats on the new job and for living your dream!

Her dream is to tour Italy and learn to cook like a true Italian,so she is saving her pennies (or should I say euros :) ) to reach her dream,which she hopes to accomplish in the year 2013.

Abigale lives in Portsmouth,which is located on the southeast coast of England.It's the second largest city within the county of Hampshire and has a population of 200,000 and is about an hour commute from London.

She also shared some interesting facts with us about Portsmouth.She said the Charles Dickens was born and raised there and also Author Conan Doyle,in case that name doesn't sound familiar,he wrote  Sherlock Holmes.The D-Day Museum,Royal Navy Museum and the Portsmouth Museum can also be found in her city.

As for some of the fun things she said to see in her area,she told us about three great places to visit.First on her list was the Spinnaker Tower,which is the tallest free standing structure in the UK,it's taller than Big Ben and the London Eye.Second on her list is Gunwharf Quays,which used to be the site of the Royal Navy Shore base,but it has been renovated and now has 95 designer shops and outlets,bars and restaurants,a cinema and also Spinnaker Tower.She says she lives close by and is a great place to spend the day.Last,but not least on her list is the Isle of Wright,which is six miles off the coast of Portsmouth and has so many things to do,she included a brochure to tell us since it would be too much to write. :)

She also informed us that her sister, Mia has writen us a letter previously,so this makes the second (or third) family to participate in our project,which is amazing.Hmm,maybe we'll have to see if writing letters is a genetic trait.I know my grandfather used to be good at writing letters and my father-in-law used to write a lot,so I wonder if that's where my children got their love of writing from?Maybe we'll have to do a survey on the topic one day to find out.

Thanks so much Abigale for your lovely letter,brochure,recipe for Double Death Brownies and postcard (which shows her house,too),which can be seen below: 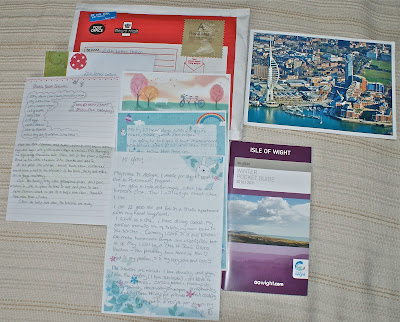