Letter #117 comes from David in Canada.He grew up in Chester,Nova Scotia,but moved to New Brunswick a litle over a year ago.He says that Chester is located on the ocean in an area of Nova Scotia called the South Shore.It is situated on a body of water called Mahone Bay.The South Shore is known for their many small coastal towns.

Mahone Bay is said to have 365 island,one for every day of the year.That's pretty cool!That makes it an excellent area for sailing.Chester has lots of summer residents that come every year for the sailing.

He says that New Brunswick was actually part of Nova Scotia until 1784 when it became its own province.New Brunswick is Canada's only bilingual province,with both French and English as official languages.Fredericton is the capital of New Brunswick,but is only the third largest city.

David has said that he is working on improviong his handwriting,so sending a letter also helped him practice his penmanship.Your letter was very easy for us to read,so thanks for writing to us.He also enclosed a photo of a covered bridge and a bilingual stop sign.Thanks again for the letter and photo,which can be seen below: 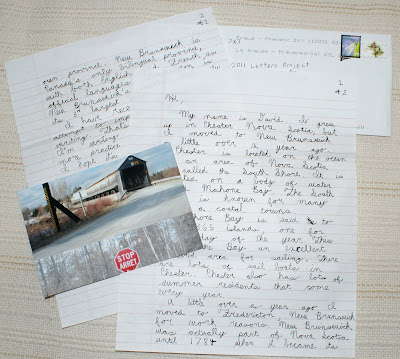