Letter #118 comes from Ana in Spain.She said that she wrote the letter in the colors of their flag.This is another letter that has beautiful penmanship!All these letters with beautiful handwriting makes me want to practice calligraphy again.She lives off the shore of the Cantabria Sea.She said that Spain is considered to be Europe's oldest nation and it is a consititutional monarchy.It is also a EU member and uses the euro as their currency.She also told us that Spain has experienced a dramatic population increase in the last twenty years due to massive immigration and generous social coverage.

Despite having the world's lowest birth rate,their country is home to 47,000,000 souls.Their official laguages are Castilian,Spanish,Basque,Catalan, and Galician and some others.She says that the story of her country is quite interesting from them fighting against Islamic invasion for five centuries to the discovery of a new continent called America by a Spaniard,not an Italian, as people had previously thought.The first city found by a European in the US is Saint Augustine in Florida,who was a citizen of her city.She says that many states were explored and named by Spanish explorers and settlers,such as Tejas (which we call Texas) and Montana.

Their national sports are soccer,golf,tennis and Formula 1.She also told us that homeschooling is not allowed in her country.Most kids attend school at age three,but is not mandatory until age 6.

Thanks Ana for your beautiful letter about Spain!You can see the letter below: 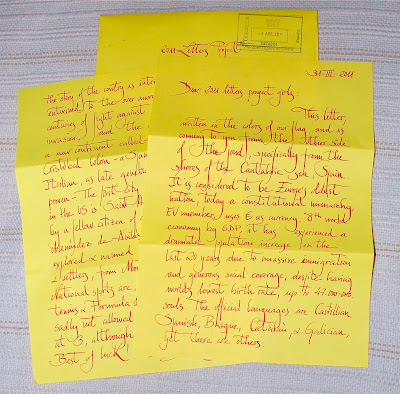 Email ThisBlogThis!Share to TwitterShare to FacebookShare to Pinterest
Labels: spain