Letter #116 comes from Sukie is England.She is 15 years old.She says that when she turns 16,she'll be allowed to drive a tractor in England. ;) Maybe that was one of those laws that was passed in the pioneer days or something or maybe because there are a lot of farmers in the area.I don't know our laws on age requirements for driving a tractor,but since she mentioned it,I just thought it was something fun to share.

She lives in the south of England and they recently celebrated a sort of national holiday event.It's called Red Nose Day and it's a huge fundraising opportunity for a charity called Comic Relief.People all over the country do crazy things to raise money.Her school held a non-uniform day where they brought in money (one pound) so they wouldn't have to wear the uniforms and the money was donated to the charity.

She also told us that homeschooling is not a common thing there and all children go to state schools called comprehensives,which is like public schools here because people pay taxes that fund the schools.Sukie attends a private school,which you have to pay for as we do in the states.

Sukie has had to deal with the loss of a loved parent in 2009 at such a young age.She says that many people ask her how long it takes to recover from the loss of a parent,but she says,she doesn't really know because she is still grieving.It must be hard being a teen and losing a loved one and I am sure it will get easier.I guess the key is to maybe strive to do something good in your life,maybe achieve that goal you mentioned with your loved one.Do something that your loved one would have liked to see you do.I know that if I died,I would,of course want my kids to miss me,but I also want them to be able to go on with their life and be a good person.One could also do volunteering in the honor of their loved ones,so that their memory is not forgotten.I guess I would also tell people not to take their loved ones for granted because you never know when their (or yours) time will come to an end,so spend less time arguing over petty things and be thankful your loved one is still alive.I think Sukie would agree with that. :)

Sukie says that her teacher at school is actually from the U.S.She says that he tells the class that the differences between England and the U.S. are both big and small.She says that one example he gave them is that the idea of comedy in the two countries is totally opposite.She says that she even watched The Daily Show since her penpal told her that the show is hilarious,but when she saw it,she didn't even crack a smile.She didn't find it amusing at all.She said that British comedians have a lot more humility and aren't as blunt as Americans.She also said that she had heard that the word "lovely" isn't used here,I'm not sure who told her that because I use the word lovely and have heard people use it,too,so I know it's still in use.

She also says that England has a huge multi-cultural society.There are even people from every continent in her school.She says that there are a few places that aren't so multi-cultural,but most are.Another interesting fact she shared with us is that London is technically considered to be a forest,based on something to do with the amount of trees per square meter.Her brother goes to school in London,so he is always telling her little facts like that one.

She also told us that her name name is very Old English and is originally a nickname for the name Susan.

Sukie enjoys playing the guitar and collecting antique books.She has a poetry book by Robert Browning (one of her favorite poets) that is 114 years old and in good condition.Her mother has a book that is 60 years old that came from a library in New Zealand.She says that she got her love of literature from her father.He loved when she would read the classics and was thrilled to discover her love of poetry.

Thanks Sukie for your lovely (see,I always use the word "lovely" :) ) letter!She has also enclosed a postcard and a cute double decker note pad,which can be seen below: 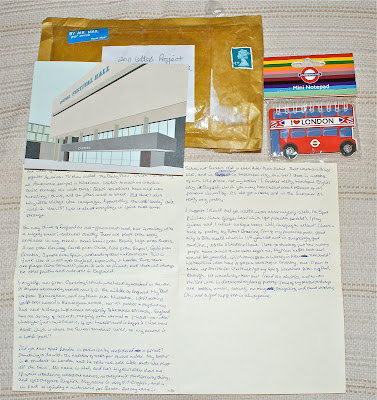