Letter #128 from the Netherlands

Letter #128 comes from Evelin from The Netherlands.She currently lives in the Netherlands but grew up in Brazil and will be visiting Brazil soon and will write to us from there about her home country.She lives in a village called Hilversum,which is 20 km southeast of Amsterdam and 20 km north of Ultrecht.It's often called "media city" since it's the principal center for radio and television broadcasting in the Netherlands.Radio Netherlands is heard worldwide via shortwave radio since the 1920's and is based there.Hilversum is known for their town hall designed by Willem Dudok.The village has one public library and two swimming pools,shopping centers and sporting halls.The city center is known as "het dorp" which means "the village".

Evelin also enclosed some wonderful postcards from her village.One shows a school,old town hall,church and the Media Museum,another shows the train station,school,New Town Hall,Bandstand,and shop fronts and another one features the New Town Hall,tv and radio tower,shopping area and a church.She also sent us a printout featuring an interesting building called the Museum of Sound and Images,which was made with colored glass panels and is related to radio and tv in the Netherlands from its beginning to the present time.

Thanks Evelin for your lovely letter and postcards that can be seen below: 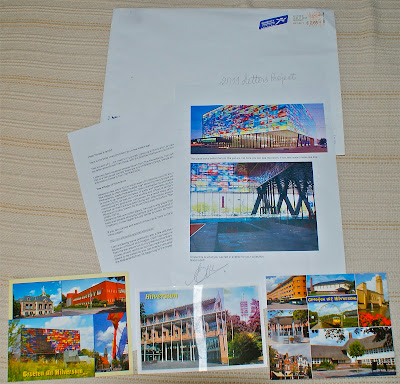