Letter #124 comes from  Vela in Washington.Vela starts off her letter with facts from the time before she was born.Both of her parents are from Europe,but from different countries.It was not until they both came to the U.S. that they met,in Los Angeles,to be exact.They met,fell in love,got married and had lovely Vela.They left L.A. when Vela was just a child,only 5 years old because they wanted a better life for their family.The crime was just too much and life was too fast paced and more of a competition to be ahead of others than relaxing and enjoying your family life.

Their search for the right place to raise a family landed them in a small,quiet town in Northern Idaho,called Coeur d'Alene....doesn't it sound like a place in another country?Vela lived there until she had to go away to college.She recalls her fond childhood memories of exploring the woods,with her cat named Flower.The town has many mountains,forests and two lakes- Lake Coeur d'Alene and Fernan Lake.She recalls the quiteness of the town,which is no longer the town it used to be.It has now become much bigger and more noisier now.

Vela finished college and earned a degree in Special Education and Spanish.Finding a teaching position proved impossible.She then came across a job as a caregiver to the mentally and physically disabled.Whileshe loved this job and helping people,she felt the need to do more so she quit her job and started nursing school.She says that if you really love helping people,you should think about becoming a nurse, so you can help people every day.

Some of Vela's interests include reading,writing,drawing,calligraphy, and making cards.She also enjoys listening to music,playing the piano and bellydancing.She also loves learning about other people,languages and cultures.She also says that she does not easily get bored since there are many things to keep her happy and busy.

Now Vela lives in a unique region of the U.S.,named after the Native American tribe that settled there.The area is called The Palouse,which is located in Washington state.The topography of the area is described as gently rolling hills,not tall,pointy mountains,but peaceful,gentle mountains.The terrain was created during the last Ice Age that carved out the land as the glaciers moved south.They left behind a unique landscape filled with lots of twists,turns and hidden pockets,which is a feast for the eyes to enjoy.The area is also known for growing such wholesome foods,such as wheat and other grains.The town is filled with such lovely people and the town is quite small,with a fifteen minute drive between towns.

Thanks Vela for your lovely letter that is written with such beautiful penmanship.You can see her letter below: 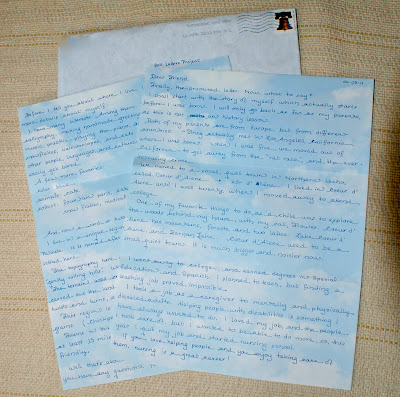 Email ThisBlogThis!Share to TwitterShare to FacebookShare to Pinterest
Labels: washington