Letter #84 comes from Dominique in Northern Ireland.She is originally from Normandy but has lived in Northern Ireland for 21 years now.She went to Ireland while studying English in France and ended up staying in Ireland.She has two daughters,one of which just became penpals with my youngest daughter,who is thrilled to be penpals with her.She describes herself as creative,disorganized and a chatter box.

They also have a cat,a dog,guinea pigs and four hens.

They live in a little cottage on the school grounds where she teaches French and her oldest daughter attends that school,too.

The town she lives in is called Ballymena,meaning "the middle townland".It is located in the county of Antrim and has a population of 28,717 people.The town was built on land given to the Adair family by King Charles in 1626,on the basis that the town hold two annual fairs and a free Saturday market in perpetuity.As of 2010,the market still runs.The town used to host Ireland's largest one day agricultural show at the Ballymena Showgrounds.The Town Hall was built in 1924 on the site of the old Market Ballymena situated in the Northeast of Ireland,about 45km from the capital of Ulster,Belfast.

Dominique  says she also loves nature.She says the beaches in her area are beautiful and wild.There aren't mountains but they have hills.She says the people are really friendly.She said that when she first went there,she was scared because of how the media portrays Northern Ireland as being a dangerous place with terrorists,etc.,but she says she has never felt threatened and recently things have quited down,so it is much safer now,too.She says the weather is not really great,with all the rain,but if it wasn't for the rain,you wouldn't see such beautiful grass growing in Ireland.I know when I picture Ireland,the first thing that comes to my mind is all the green grass and open space,so I agree with her that they need the rain to keep it beautiful.

Along with her letter,she included some brochures and recipes of Banofee Pie and Ulster Fry.I have taken a picture of the recipes alone so that hopefully you can click on the picture to enlarge it to get the recipe.Dominique's lovely letter and brochures and colorful envelope with a great assortment of stamps can be seen below: 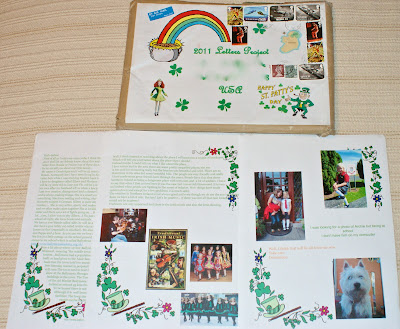 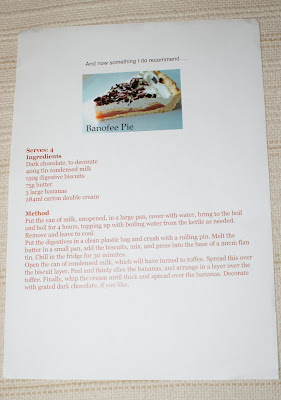 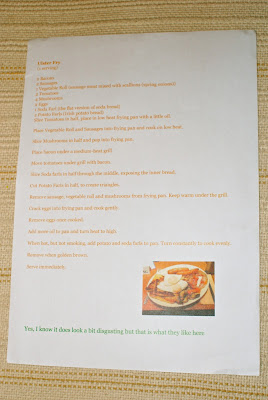 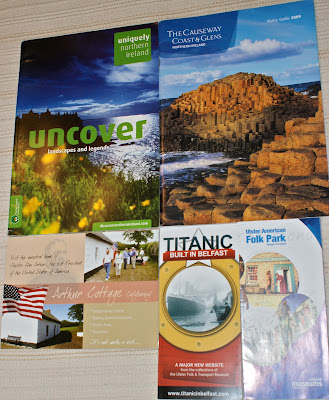 Email ThisBlogThis!Share to TwitterShare to FacebookShare to Pinterest
Labels: ireland