Letter #126 comes from Adriana in Brazil,who describes herself as an old-fashioned girl,preferring quietude and the small,simple things in life.One of the things she really enjoys is penpalling and opening the mailbox to see a lovely letter greeting her.She loves stationary,books,postcards,and other cultures,which penpalling allows her to explore.She says that penpalling always leads to wonderful new friendships and a smile at the mailbox.

She has told us a little about her great country of Brasil.It is divided into states and is a federation and has a federal district called Brasilia.Adriana lives in the state called Ceara and lives in the capital,Fortaleza.In Brasil,the official language is Portuguese and not Spanish,as many think.Almost all other Latin American nations speak Spanish,except for them because they were colonized mainly by the Portuguese,therefore it became their language.She also told us that Brasil is the 5th largest country in the world and that like the U.S.,it has diverse climates,weather,food,accents,etc.She said she loves being Brazilian! She also told us that you can get a direct flight from Atlanta to her hometown and hopes that we can visit one day. :)

She made us a visual map of her little corner of the world,along with a playlist of music she likes and a postcard of her hometown,Fortaleza,which will be hosting the World Cup Games in 2014.Thanks so much Adriana for your lovely letter,postcard,map and playlist!You can see them below: 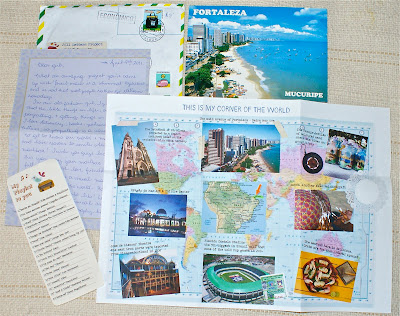 Email ThisBlogThis!Share to TwitterShare to FacebookShare to Pinterest
Labels: brazil