Letter #127 comes from April in North Carolina.April actually lives on an Indian reservation,about 50 miles from the main reservation in Cherokee,NC.April is part Cherokee Indian and loves learning as much about her heritage as she can.With many people marrying outside of their race,many people are now losing their ethnic history since many people are focused on their "American" identity and forgetting their past ancestry,so I think it is nice to keep your ancestry alive to tell your future generations.That is one of the great things about America,the diversity of people and being able to learn about other cultures without having to go to another country.

Everyday life for April consists of work and spending time with family.Some of her pleasures include reading (#1 on her list),traveling,photography,writing letters,learning her native language,and watching tv.She loves to collect glasses,postcards,stickers and photos.

April currently works in the middle school on the reservation,working as an advisor/tutor for grades 7 and 8.

April has enclosed a wonderul Cherokee cookbook with bread recipes.We really enjoyed the way it was written,I actually felt like we were there listening to her tell us how to make the bread.The book showed a picture of each step with the lady explaining each step....such a unique and interesting book.She also gave us a copy of the Lord's Prayer written in her language and a wordsearch puzzle and also a chart showing the syllabary.April says they don't have an alphabet,but a syllabary made up of 85 sounds,with a character for each sound.It was created by Sequoych in the 1800's and her tribe is the only one with their own written language.How interesting!I never knew we had an Indian reservation in the state right below us,so I will have to look into this interesting fact more.April also told us that her grandmother gave her the name Apple...I guess grandma wanted her to be a sweet person,which it seems like she is. :)

Thanks April so much for your lovely letter.I have always been curious about Native American life because we thought we had Indian blood in our family when I was younger,but found out we probably do not.Thanks also for the wonderful cookbook,stickers,bookmark, and the printouts.Please look below to enjoy her goodies: 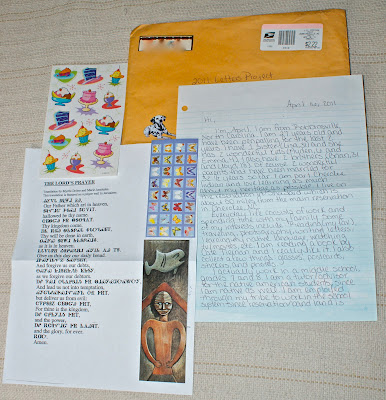 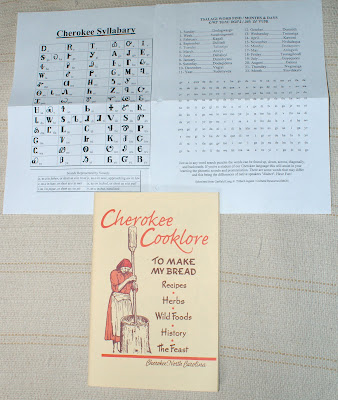