Letter #85 comes from Craig in England.This is another lovely letter with beautiful penmanship,just look at the "hello" greeting,it's simply beautiful!He said that his letter was written with a dip-pen,a pen that is the next step from a quill pen,but made of metal to increase its life.

Craig lives in the most northernly part of the English counties on the east side of the country that borders Scotland.The county name (Northumberland) comes from a long time ago when the county was a lot bigger and more important than it is today.About 120 miles south of the city of Newcastle upon Tyne is a city called Hull,the river that runs through Hull is called the Humber and that is where the name Northumberland comes from - the land north of the Humber;Northumberland.

The county is a rural county producing food and has a small area,but is close to Newcastle,so it still has some "heavy industry" including shipbuilding,once the main industry in the River Tyne.The other big industry nearly 140 years ago was coal mining.Coal mining was so important,that a saying, "taking coals to Newcastle" which was pointless,was coined;nobody would bring coal because they had so much of their own. :) The area now produces automobiles (Nissan),beer, and is famous for its hospitality.He said that a few years ago it was said to be the 5th best city in the world for its nightlife.

He moved to the area he is in now 15 years ago and decided to stay because the area is so beautiful and unspoilt.He works for a well-known American company in a factory that produces perfumes for men and women.

He and his wife have many pets and his wife loves tropical fish...their fish collection seems to keep multiplying and they call their aquarium the cats television because their cats could sit and stare at it for hours....I guess they are wondering when they will become their dinner. ;)

Craig used to be in the army and spent most of his army life in Germany,but also went to the Falkland Islands twice,where he said he saw a lot of penguins.He also spent 8 months in the US and even drove from Florida to California,that must have been such a long and tiring trip,but also exciting to see so many states,although you don't get to see much from the highway,but you do get to see different landscapes.

His hobby is riding motorbikes and during the warmer months,he works with the police,teaching them how to ride more safely.

Craig loves writing letters to people all over the world.He has penpals in the U.S.,Canada,Indonesia,Germany and in England.He enjoys making his own envelopes,so that each letter is different.He also buys books from old book shops or clearance shops and turns them into something more interesting than store bought ones.We would love to see his transformed books.We bought some old books with beautiful covers just to do some art journaling in and make them unique,but we haven't started yet.It's always hard to start it for fear of ruining a great book.

As you can see from the letter,he loves to use fountain pens and having people to write to gives him an excuse to buy more pens,paper and ink.He loves the pens so much that is he actually having a custom made pen being made for him in New York!I think we have a lot to learn about the different types of fountain pens obviously.I just thought they came in small,medium and large,but I guess there must be a variety of different types of pens.

Thanks Craig so much for your lovely and beautiful letter!Please see his letter below that he enclosed in a handmade envelope that we love: 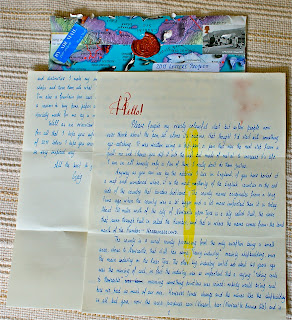