Letter #131 comes from Garci in Arizona.She lives in a suburb of Phoenix.She says she has learned a lot through meeting people,travelling and having international penpals.Phoenix is the sixth largest city in the U.S. and Arizona was the 48th state to join the union in 1912,so there will be celebrations next year for the centennial.The state's anniversary shares the same date with a popular holiday,Valentine's Day.

She also says that Arizona is known for the 5 c's - copper,cattle,cotton,citrus,and climate.She lives in the desert region so they get very little rainfall and lots of sunshine.They have mild winters,which attracts many tourists,including retirerees who go there to get away from the snow up north and then go back home in the summer,which they call "snowbirds".I know in Michigan,many people would go to Florida for winter and then the Upper Peninsula (in Michigan) during the summer.

In Northern Arizona,there are many pine trees,mountains and of course,the Grand Canyon.She also told us that Route 66 runs through the state.It's a very popular highway that many people like taking,especially for cross country trips.There are many diners and stores with 1950's memorabilia.I have always wanted to travel on Route 66 and take in all the views.

Another thing in abundance in Arizona are palm trees ( I love palm trees).They are not native to the area,but were brought in from another place and they happen to grow really well in her area.

Garci loves to ride with her fiance on his motorcycle,travel,create mail art and penpal.Thanks Garci for your lovely letter and for the postcards highlighting the treasures of Arizona,the Grand Canyon,Route 66,cactus and since we love blythe dolls,she also sent a blythe postcard.You can see them all below: 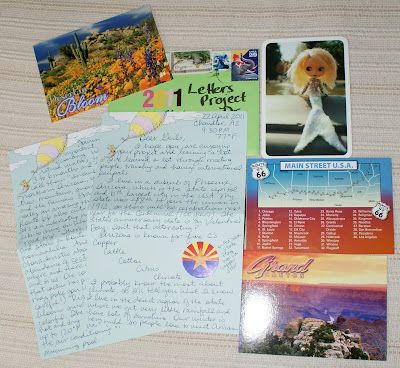