Letter #119 comes from Erika in Florida,the "Sunshine State".Erika is a mother to three wonderful boys.She has lived in Tampa all of her life.She lives close to the original site of Fort Brooke.She also shared some facts with us about her area that I will list below:

•They are the thunderstorm capital of the world.
•Even though they are located on the coast of the Gulf of Mexico,she says that they haven't seen any negative impacts from the BP oil spill.
•The population of the "Greater Tampa Bay Area" is close to 4 million people!
•Tampa grew to become the metropolitan area that it is today through exporting phosphate and cigars.Vicente Martinez Ybor moved his cigar factory there from Key West after Henry B. Plant expanded the railroad to inlcude Tampa.His legacy lives on today in Ybor City,which is a cultural center for Cuban-Americans.
•Henry B. Plant also built a luxury hotel there,which has been restored and converted to the University of Tampa.It is done in a Moorish style with silver minarets with crescent moons.She says it is very pretty.

Erika grew up on Davis Islands,which is a man-made archipelago of three islands that was created from back-filling two natural land masses.Today the islands have been reduced from three to two because the canal between the last two islands were filled in to make a runway for Peter O. Knight Municipa Airport.The islands were even featured on the show "Extreme Home Makeover" because an airplane crashed into the house of the popular pizzeria (Tates Brothers) owner's  house.

She has said that in the last ten years, the city has changed so much.It has gone from a small town vibe to a "fancy pants" area.

Thanks Erika for your lovely letter,which can be seen below: 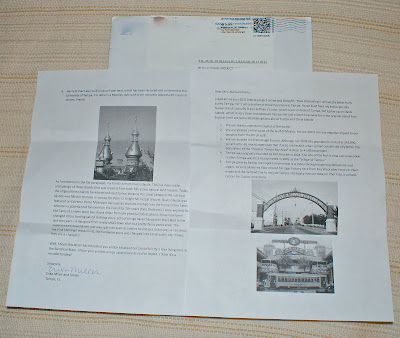