Letter #83 comes from Caroline from Belgium.She studies Dutch and English literature and linguistics at the Univerity of Leuven,which was founded in 1425 and is the oldest univeristy in Belgium.She says that for her English exams,they can choose to take the test in either British English or American English.She chooses British since that is what she was taught in school.

Caroline's native language is Dutch,but it's the same language they speak in The Netherlands,but the dutch they speak in Belgium is a little different.She says it's often called Flemish.The way she describes it is like the english spoken in Britain,America,and Australia,they all speak English but with different dialects.They love to laugh at each other's Dutch dialects. :) Here are some dutch words/sentences she shared with us below.See if you can figure them out since they are common words we use everyday, I will not put the translation for you. :)
•Hallo
•goedemorgen
•goedenacht
• hoe gaat het?

Erica says that in Belgium,most people speak more than one language.There are three official languages:Dutch,French and German.Most people also speak English and even some Latin.She can speak Dutch,English and French and can understand some German.Next year she plans to learn Japanese.We love all things Japanese so it should be exciting to learn Japanese....hopefully we will get a letter from Japan.

She also said that she has lived in the same place her whole life.She loves to travel,but has never been out of Europe.Her recent travels include Amsterdam,Leeds and Paris (oui,oui). :) Her dream is to one day visit Tokyo and the US.She would really like to visit the Wizarding World of Harry Potter in Florida.

She says her favorite show is Glee,but that it's not well-known in Belgium.The cast of Glee will be visiting London and Dublin this summer but will not be able to attend.

Erica also enclosed a variety of ticket stubs and a map showing us where she lives and a booklet about the museums,which she says that when you're 26 or younger,you can get into the museums for $1.50.She also sent some coins worth 1 euro cent each,she says most people dislike the coins because they really can't use them and so they just take up space in your wallet.Thanks Erica for the lovely letter and goodies,which can be seen below: 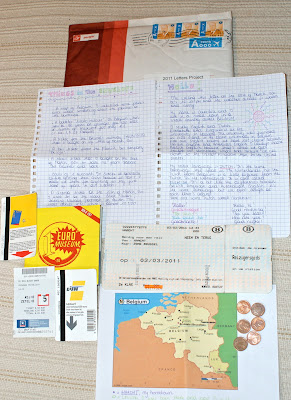 Email ThisBlogThis!Share to TwitterShare to FacebookShare to Pinterest
Labels: belgium