Letters #14 and 15 from Brazil and Spain

Sorry about the delay.Here are the 2 letters that arrived yesterday:

Did you guess the origination of the first letter?If you guessed Brazil,you were right.(Did the brazil nuts confuse you?).....
This lovely letter came from Andreia,who lives in Sao Paulo.She loves studying and learning so much that she graduated from 2 colleges.To be honest,if I was rich,I'd go to college and get many degrees,too because learning different things is so exciting to me.She is also a teacher.She enjoys reading,music,learning about other cultures,geography and much more.She also wrote that she doesn't enjoy all the horrible news broadcasted on the tv,either.I just mentioned the same thing earlier....great minds think alike. ;) She also noted that their cuisine is much like Italy...lots of pasta.We just had lasagna for dinner last night...does that mean we ate Brazilian? :) Thanks so much Andreia for sharing your life in Brazil with us.It is greatly appreciated!Here is her letter below along with some beautiful postcards: 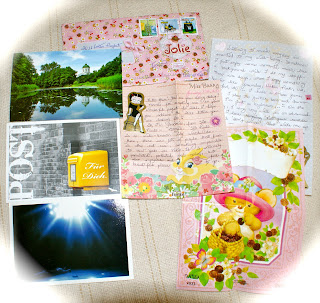 Next, we have another very creative letter from Spain...I think the clues are too easy for you all. :) Sandra lives in beautiful Barcelona.She has put a lot of thought into this amazing letter.Not only did she include postcards, but she explained each postcard on each page.We really liked that,because we always get these lovely postcards but don't know anything about the picture.Sandra is originally from Holland, but has been in Spain for 8 years.Her and her boyfriend have a collection of guitars.She also works for a printer company,but finds it rather dull. The first postcard she wrote about was Barcelona's most famous building- The Sagrada Familia (Holy Family).It's quite interesting because they have been building it for 150 years and it is still not complete because Spain does not fund religious buildings,so they must get private donations....who knows how long it will be until it is completed. 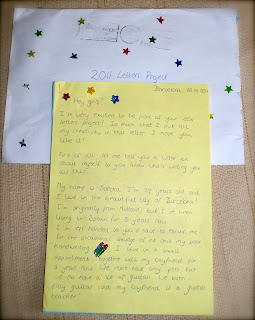 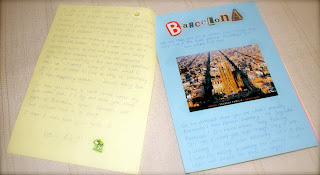 In these postcards below,she describes the architecture of Gaudi,who also designed the Sagrada Familia above.He has designed many buildings such as the ones below,which she lives close to.That must be so nice to live by beautifully designed buildings.She even said some people live in the building you see up close on the right side below.Can you imagine living in such a place! 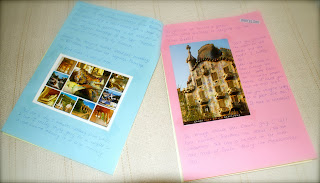 She also noted that Barcelona has 1,600,000 inhabitants.That's a lot of people. :) Tourism is a major source of income for their city.As you can see below,cruise ships arrive daily with many tourists.As you can also see on the right side below,she drew us a map of her city that shows us how her city has the Collserola Mountains on one side,the Mediterranean Sea on another side,the Besos River to the west and finally the Clobregat River to the east.It seems like they have a lot of privacy. :) The picture of the man is their mayor,Hereu.....when my daughter first saw it,she thought it was Sandra's husband.lol! 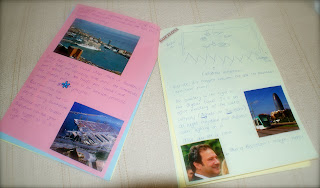 Below she has explained how Spain has several autonomous (this happens to be one of our SAT words that means independence or freedom of will) provinces.She says that Catalonia is one of them and that they have their own language called Catalan,which is similar to Spanish.For example: In Spanish "Thank you very much" would be "Muchas Gracia" but in Catalan it would be "Moltes Gracies". The stamp on the left features the king,Juan Carlos.The royal family does not govern the country,that is done by their prime minister and his government.As you can also see below,sports like soccer are very popular in Barcelona. 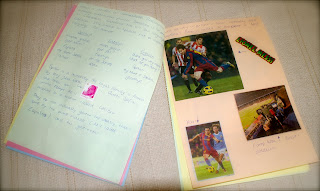 The pictures below continue with the sports theme.I think everybody knows their famous tennis player shown below-Rafeal Nadal. :) On the right you see the typical architecture of southern Spain...white houses to fight the heat and narrow streets so the sun doesn't enter.Doesn't it seem like such a lovely place to live.I bet everybody knows each other. 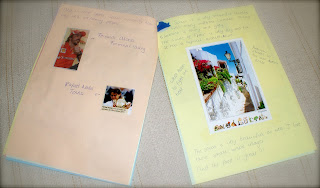 Below is Spain's most famous dish- Paella.It consists of rice,seafood and vegetables.I'm from Louisiana and this looks just like our jambalayas. :) She says it taste better when it is cooked on the fire as opposed to the stove....I agree with her 100%! To the right is Barcelona's traditional meal called Calcot,it's only available from January to March...she was on her way to eat some the day after she wrote this letter.I hope it was delicious!She also noted that you will get your hands dirty eating this since it involves you doing some work to get to the inner part. 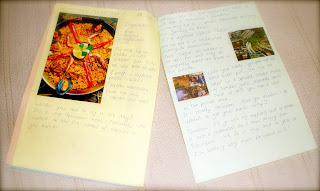 As a special reward,she included her favorite tea. 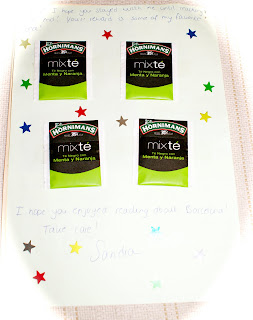 Thanks Sandra for putting so much effort into your letter and telling us so many great things about Barcelona and Spain.We really enjoyed it...much better than any brochure!Again,we truly felt like we were on a personal tour of the area.We truly loved it! It was so great to read about it and see pictures of what you were describing!Thanks so much for helping us learn about another lovely place.This project has definitely been a success already!
PS-We also realized there was no postage on this lovely envelope....I wonder how that got past the post office? :)