Wow,I can't believe we are getting close to 30,that's a good number.I know at first we weren't sure how many we would get,but so far things are looking good.Letter #27 comes from Chris in Tucson,Arizona.He lives about 60 miles from the Mexican border with his wife and step son...congrats on the recent marriage!He says that Tucson is a metropolitan city with a population of about 1 million people.There are even some cowboys in the area.He says it's a very diverse area and that the community feels much smaller than it really is.One thing that he mentions that I know many people are talking about is the hispanic population.He says that while they are a big part of the population,most people don't even think about it, that "people are just people,really".He said that the media has made it into a bigger issue than the people there make it.That is something the media is always good at doing...dividing people on very personal issues.

Chris works for the local University as a network engineer to make sure that the University's network and its connections to the internet work as they should.That is definitely an important job since everybody relies on the internet for information and communicating.
He has also enclosed a wonderful souvenir that we love from Washington,DC that he got last summer (maybe we saw you there?).It's a gallery pass to the House Chamber for the 111th Congress.He told us that you can ask your representative for the gallery passes...no appointment needed or anything,you just go and get the passes.I can't believe we didn't even think of this when we went,but will definitely check this out the next time we go.I think it's very important for us all to see our government at work and to show our kids.I think it would definitely be an experience my kids wouldn't forget,so thanks for telling us about this!I might not have thought about it when we go again,but now I will remember to do this.
Here is the letter from Chris below.I didn't get a picture of the back,but it was sealed closed with a wax seal...we all thought that was cool. :) Thanks Chris for the great letter! 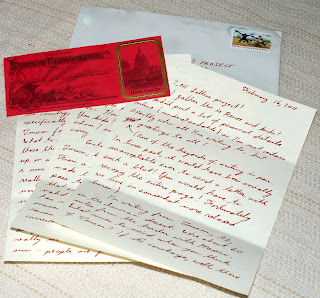