Letter #183 comes from Jane in Canada.She lives in a small town in Northern Ontario,called Kapuskasing,which comes from the Cree Indian language,which means "bend in the river". The town was founded in 1911 and they will be having special celebrations this summer for their 90th anniversary.

The land in her area is flat with lots of trees,mostly black spruce trees,along with several lakes.The winters are long and cold,with January and Febraury being the coldest months,with temperatures around -40°F! I had to look twice to make sure that was right because that is cold!I remember a few winters ago the wind chill in Michigan was -32°F and it was terrible,your eyelashes would freeze and even the tears in your eyes would freeze.....it was absolutely terrible!She has noticed a change though during the past winter,with no wind chills and more clear and sunny days.

She says they are now starting to see signs of spring,green grass,buds about to come out on trees.Their summers are quite pleasant with temperatures in the 70°-80° F range,with the occasional 90° temps,but very rarely.She says that her town is beautiful in the summer months.Many people fill their yards with flowers and keep their lawns green and beautiful.

Jane has seen many ravens this past winter season and didn't realize just how big they were and thinks they are so beautiful!Many different animals can be found in her area,including black bears,foxes and moose

In the early days of her town,lumberjacking was big business.There is currently a large paper mill there which produces pulp for newsprint.Since 1928,The New York Times  has been printed on the paper produced there.The lumber business has decreased dramatically and the work force at the mill is much smaller.

She says that like most small towns everywhere,her city has lost businesses and population.At one time, there were 13,000 people in her city,now they have 7,500.Another one of their major employers in her town also announced that they will be shutting the business down in 2013.It's so sad to see so many businesses close and people lose their jobs.

Jane says that most people in her area speak French as their first language,but most are bilingual.When they realize you don't speak French,then they start speaking English.

She also noted that General Motors Canada has their cold weather development center there to test their vehicles in cold weather conditions.She says they have a race track where they drive on and that they also drive the cars on the highways to see how they work under normal conditions.We had the same thing in Michigan.

During the summer,they have an annual event called the Lumberjack Festival,celebrating the early days of the area.There are demonstrations and competitions involving lumberjack tasks.For example,there are contests for sawing logs with chainsaws and also with hand saws...it reminds me of the show called "Frontier House" where they had the same type of competition. :)

Jane and her husband live two hours from the next largest city and ten hours away from Toronto.They have both lived in the area for one year now.Jane grew up in South Dakota.They moved there for her husband's job.

She also says that the money looks different than US money,but is otherwise the same.There are no $1 bills,but a $1 coin called a "loonie" since there is a loon bird on it.There is also a $2 coin called a "toonie".The downside about living in Canada is that there is a 15% tax on everything,even postage stamps.She also said that if she orders something from the US,she has to pay the 15% tax upon delivery.Some packages are even opened and taped back shut by customs.

She says that it isn't really different living there,items in the stores are labled in both English and French,as well as most signs and ads.The people there are very friendly and proud to be Canadians.She also said that they eat their fries with gravy (I recall the letter from Terri in Oklahoma sharing a picture of it),but Jane still loves her fries and ketchup. :) They also put spaghetti sauce and mozzerella cheese over their fries,but she has not tried those yet,either.

Thanks so much Jane for your lovely letter and postcards,which can be seen below: 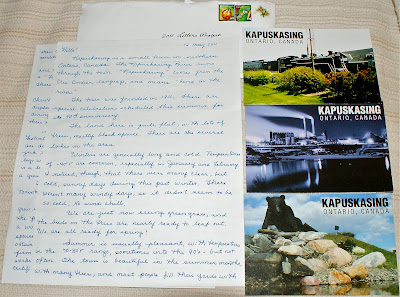