Amanda is studying Cellular and Molecular Biology at Northern Michigan University.She wishes she could be just a history major,but she doesn't like to teach or write,so she picked genetics to ensure she would have a job after graduation and because she gets to do her senior internship at the Mayo Clinic.The Mayo Clinic is the second best hospital in the country,behind John's Hopkins,they also have the best lab system and John's Hopkin's even runs some of their tests through the Mayo Clinic.She has to wait three years before doing her internship there,but she is really excited about it!

Amanda has also recently become hooked on postcrossing and loves the thrill of getting a postcard or letter in the mail.She also told us that if we ever go to the UP,we must try a pasty from Jean Kay's in Marquette,Michigan.She also told us that the upper peninsula has the highest concentration of Finnish people outside of Finland...see, even though we lived in Michigan,we didn't know that fact.We also didn't know either that people call the lower peninsula "troll land".Haha!

Along with her lovely letter,she sent us a printout of a little joke about the upper peninsula....maybe we can switch the peninsula's around and call the UP troll land...haha! ;)

Well,Amanda,we wish you all the best and hope that you are not continously stressed out and broke....those two things don't go good together. ;)  We also hope your exams went well!Thanks Amanda for writing!You can see her lovely letter and joke below: 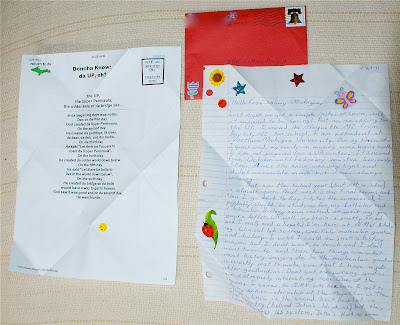 Email ThisBlogThis!Share to TwitterShare to FacebookShare to Pinterest
Labels: michigan