Letter #173 comes from Angela in Maryland.Angela lives in a suburb of Washington,DC called Wheaton.Angela works as a librarian (yes,another great librarian!). :) Wheaton is 12 miles from DC and is one of the stops on the Red Line of the Metro (subway) that serves DC.Her city is very walkable and she is close to many places.She says it's really nice when it snows because when the roads aren't passable,she can still walk to most places.

One of her favorite places to visit is Wheaton Regional Park,which includes Brookside Gardens,which is a flower garden/conservatory.She says it's a great place to go to enjoy nature since the city is an urban area.She says they have a yearly event called "Wings of Fairy", where they release the butterflies in the conservatory building so they are free to fly all around.Everybody gets to walk among the butterflies,which must be really nice because butterflies are so beautiful and unique.

Angela also enclosed some printouts about Wheaton,which I will summarize below:
Wheaton is an unincorporated community in Montgomery County that started out as a crossroads in the 1700's.Wheaton was named after the Union General Frank Wheaton,who defended nearby Fort Stevens and Washington,DC in the Civil War against Conferderate General Jubal Early's attack in July 1864.

The first U.S. television license operated out of Charles Francis Jenkins' home in Wheaton,in 1928.Wheaton became the birthplace of the first television transmissions from Jenkins Broadcasting.

After WWII,a massive influx of Federal government workers moved to the metropolitan area.Prior to 1947 only 29,000 people lived in Wheaton,mostly on farms and large estates.The number doubled in 1950,then again in 1960,creating unprecedented growth.

In 1954 building began on Kemp Mill Estatesof the Heitmuller Tract,which opened in 1959 as Wheaton Plaza Shopping Center.At that time it was the 6th largest in the nation,and has since had major redevelopment as Westfield Wheaton.

Along with her lovely letter,Angela included brochures from Westfield Mall,Brookside Gardens, a Metro Pocket Guide, and since she remembered we are collecting books in different languages,she said that her library sells used books that also includes books in several languages,thanks to the diversity of her area.She included the book,"Spot", in Arabic,"The Very Hungry Caterpillar", in Yiddish,and a Garfield book,which neither of us were sure about the language,I think it could be Dutch,but maybe somebody can click on the picture below and tell us if that is correct or not.Thanks!

Thank you so much Angela for your lovely letter,brochures and books (we really love them & didn't have books in those languages,so thanks a bunch!).We also loved the new "Go Green" stamps,our post office didn't have any as they only get a few of the new stamps. :( They can all be seen below: 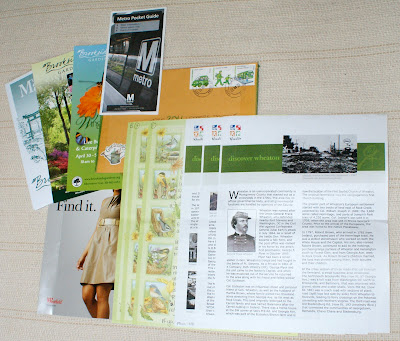 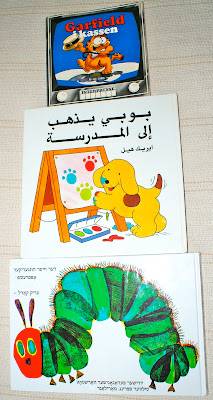 Email ThisBlogThis!Share to TwitterShare to FacebookShare to Pinterest
Labels: maryland