Letter #181 comes from Hilja in Finland.Hilja lives in a small town in Eastern Finland.She just moved there due to her new job being located there.Her first day of work is May 16th...I hope she had a great first day at work!She will be working as a customer advisor.Hilja loves customer service and being in touch with different people.

Before moving,she lived in a city called Joensuu,where she studied Finnish language and literature at the University of Eastern Finland.She says that since then she's been wondering what she'd like to do in her life,but not sure she will ever find the answer to that.Sometimes it just takes time to find what you really like...just follow your heart and it will lead you the right way.

Hilja has many hobbies.She joined postcrossing in 2006 and has already received thousands of postcards and like us,enjoys opening the mailbox to find something other than bills. :) She compared postcrossing to the movie "Forest Gump",when he says,"life is like a box of chocolates,you never know what you are going to get",that's the way she feels about the postcards,you never know where they are coming from or what they will look like,so that is the exciting part,of course.

She also enjoys reading and classifies herself as a real bookworm and usually reads two or three books at the same time.She reads books in English,Finnish and Swedish.She enjoys all types of literature,from children's books to postmodern novels.She just finished reading a book called "The Evolution of Calpurnia Tate" and highly recommends it.

Hilja also loves watching sports on tv as much as possible.When she wrote the letter,there was a championship game going on for ice hockey.She also loves to go jogging and running and tries to excercise several times a week.One of her favorite things to do is enjoy nature and take hikes in the woods.She says that the nature in her area is very beautiful and that you can get very close to wild animalsShe once found some tracks in the snow and she didn't know which animal made them,so she showed her father the picture and he told her they were bear tracks!

She has also recently been to a city called Koli and thinks it is one of the most beautiful places in Finland. 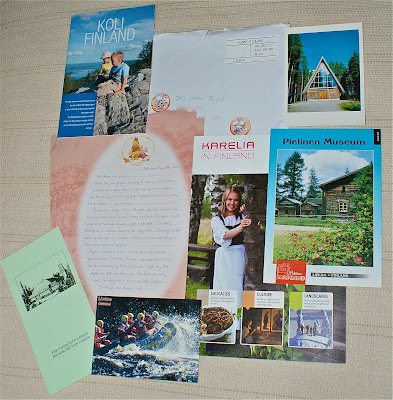