Letter #182 comes from Marie in Denmark...this is our first letter from Denmark!Marie comes from the second largest city called Aarhus.She lives with her fiancee that builds robots and other things that are being sent into orbit into outer space,which she thinks is very cool! (We agree!) Marie is currently a student,studying communications.She dreams about helping organizations find ways to improve work environments.As she said,she wants all mommy's and daddy's to have fun while at work.I think that is a great idea since nobody wants to feel terrible at work and come home in a bad mood.

On the front of one of the papers she wrote on is a picture of Tivoli,one of the world's oldest amusement parks in the world!It is located in the capital of Denmark,which is Copenhagen.She said that Denmark is usually hard to find on a map because it is so small,so she drew a picture for us.She says there are a lot of small islands around the bigger ones,which are all a part of Denmark.She says there is an island called Bornholm where the citizens speak a language closer to Swedish than Danish.

On the front of the other paper she wrote us on is a picture of "The Little Mermaid" statue,which is a story written by Hans Christian Anderson,who is a famous Danish author.I did not know that he wrote "The Little Mermaid",we only know that it's a Disney movie and didn't even think about who the author was.She said the statue is in the harbor,just like the Statue of Liberty is in the harbor in New York.

Marie also shared some Danish words/sentences with us below:

Thank you - Tak
I love letters - Jeg elsker breve
Where do you live? - Hvor bor du?
What's your name? - Hvad hedder du?
How are you? - Hvordan gar det?

Thanks Marie for your lovely letter,which can be seen below: 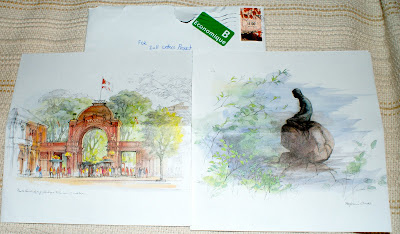 Email ThisBlogThis!Share to TwitterShare to FacebookShare to Pinterest
Labels: denmark